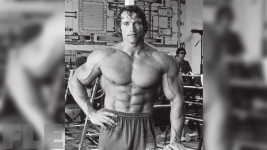 What do Isometric Exercise, Arnold Schwarzenegger and Bodybuilding all have in common?

You may be surprised to learn that Isometrics has been used in bodybuilding workout routines since it was first discovered. Arnold Schwarzenegger was probably its biggest proponent.

If you have ever wondered how bodybuilders utilized isometric exercise as part of their bodybuilding routines then ... read this article and discover why every single bodybuilder uses isometrics in their workouts and in getting ready for a competition!

You would think that bodybuilders -- the guys that throw weights around as if they were plastic dolls would never use isometric exercise in their bodybuilding routines wouldn't you? However, the exact opposite is true.

In this article, I will give you two examples of where bodybuilders use isometrics.

Each time you do a double biceps pose, -- for example -- you are holding the pose for a few seconds at a maximum contraction. This is isometrics. One way to apply this and get phenomenal results is as follows:

Mr. Schwarzenegger's in his book "Arnold: the education of a bodybuilder" revealed that to get his calves as defined, hard and cut as possible he would do a lot of "tensing" after each workout.

He referred to this method as "Super Isometrics." (You can find is on page 72 of that book)

Joe Weider who created most of the terms currently being used in the bodybuilding industry... referred to isometrics as Iso-Tension. (It is one of the Weider principles for building a strong and powerful physique.)

Let's explore the second example of how isometric exercise is used in bodybuilding.

Again let us go back to... Arnold Schwarzenegger.

Arnold would perform an exercise called "bicep cheat curls." In this exercise he would use more weight or resistance than normal. The logic behind this is to force the muscles (typically a 90° angle) to develop strength in the maximal contraction.

Arthur Jones the creator of the Nautilus exercise equipment also indicated that the use of isometric exercise in bodybuilding was one of the best things that any bodybuilder could do.

I'm a fan of both Arnold Schwarzenegger and Joe Weider's which brand I usually buy. I know for a fact that isometric work because it's the same with Traditional Martial Arts practices, specifically Kata's and in Yoga. Body tensioning or isometrics in body building parlance does help in developing even muscles as well as strengthening the body part itself. That's why boxers and MMA practitioners use the medicine ball, it's to condition their bodies to take and overcome strikes and punches to the specific body area.
Similar threads