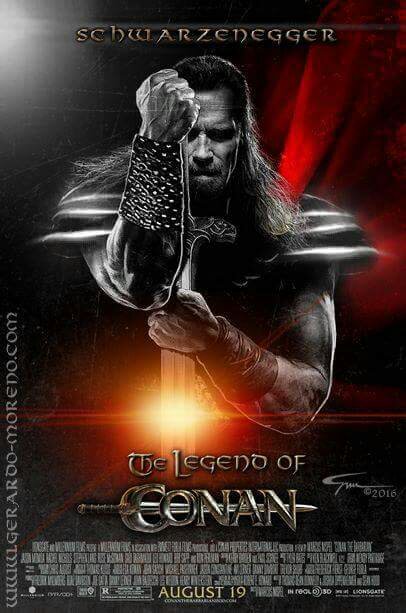 Well I bought it, if it is indeed a fake. If it is real, though, I would be impressed to see how this guy is making time for all of this. Actually, now that I think about it, I hope that it is a fake because he should probably be spending his time doing more important things, given that he is the governor of the State of California. I am sure the truth will come out, but I will go ahead and assume that it is a fake. Maybe not though, who knows.
C

Arnold is not governor any more, it is Edmond Brown Jr.
C

The movie is listed on IMDB, but it is listed as a potential movie. The last update I can find on the movie is from Feb 2016, where Arnold himself says it is a go still. You can read about it here:

I heard about this movie on IMDB the other day, I didn't know he was going to be in it, but I don't know anything about the plot of the story. I started thinking about that guy who has his own show, his name is also Conan, or something like that.

Is this like a story that is supposed to be based in the past?
T

Maybe he will do another "jingle all the way" movie with the holidays coming up. Lol

The movie is supposed to be 30 years after Conan wins the throne. A group deposes him and he fights to get the throne back. The 30 year time span is perfect.


"Conan the Conqueror,” says Arnold, "where I’m sitting on the throne for years and years - decades, and then all of the sudden, the time comes when they want to overthrow me. So that story WILL be told and that movie WILL be done."

Interestingly enough, "Conan the Conqueror,” was to be the title given to Arnold's proposed 1987 sequel to his Conan the Destroyer film. TheArnoldFans is thrilled to hear Schwarzenegger give us hope that Conan is still alive and well.

“Yes,” confirms Arnold, “as a matter of fact, it (The Legend of Conan) has been written and we are now looking for directors so this is a serious drive (now for Conan).”

Although Arnold may hit age 69 when filing begins later this year, Schwarzenegger shows no signs of letting age slow him down.

"One of the advantages for when you train every day,” begins Arnold, "when you bicycle everyday, when you work out every day is that age is not registering in the body the same with everyone else. Because when you stay in shape, you do turn back the clock. So I feel great and the last few movies that I’ve done, I’ve done many of my own stunts. I did all the physical stuff and it didn’t wipe me out and I have plenty of energy and feel really terrific. So I am absolutely convinced that I can do the Conan movie and do the horseback riding, the sword fights and all the fighting.”

Arnold’s closing remarks of his readiness for Conan was being drown out in cheers as Conan remains Arnold Schwarzenegger’s longest running biggest fan-anticipated project!

We also heard from Legend of Conan producer Frederick Malmberg:

Yes, Chris Morgan and I are meeting with directors at this moment. Interest is high, many are fans of Conan but we are not rushing. We have a great script and now we need the right director for the job.

Triplets may still be on Arnold’s plate as well. Arnold stays hungry for the Twins 2 sequel!

“Yes,” confirms Schwarzenegger, “we’ve been working on this now for the last two years, I would say. The idea was to have Danny Devito, myself with Eddie Murphy, be all of a sudden, the other twin - the triplet that we find. It comes out that after our mother dies, the will gets read out loud and it says you get this, and you get this and your OTHER brother gets this. And we are like, 'what, what other brother?' And then we discover that there is something off here. Then we find out about the experiment that was made and there was some black person involved."

“The script is actually done,” says Gad. "Everybody agrees that it's great. We wound up doing 2 drafts. Everybody read the script and loved it, so I hope it sees the light of day at some point. It's there and in great shape."
Gad also tells us that Julius & Vincent have grown apart since the last film. “Their lives have changed,” Gad tells TheArnoldFans. “The two of them find themselves at a major crossroads where they've sort of grown apart over the years and what winds up bringing them together is a 3rd brother they never knew they had who could potentially be played by Eddie Murphy."

Finally, Arnold had nice words to say about his friend Sly Stallone winning the Golden Globe and says he too believes an Oscar will one day be in his future.

“It will happen,” says Schwarzenegger.

We believe Arnold’s two best chances to get an Oscar for best actor may be his next two films: The Legend of Conan (said to be Arnold’s very dramatic “Unforgiven") and the movie he just finished, 478! In this revenge drama, shooting in Columbus, Ohio, Schwarzenegger plays a man seeking revenge on an air traffic controller, who accidentally caused a tragic plane crash and the death of Arnold’s character’s wife and child.
Click to expand...

No disrespect to Arnold but I think an old Conan just ain't gonna look like a good movie.
From everything im seeing on here and the media he is doing a lot of sequels to his old movies.
Hmmmm will he talk Sylvester into another expendable sequel?!?
Similar threads