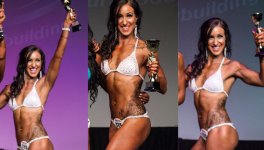 
‘‘It was my first ever comp not only in body building but in fitness in general. I was so nervous and excited.


‘‘I learnt so much about myself, not only physically but mentally.


‘‘This comp was a challenge in so many ways. But it was also incredibly rewarding.


‘‘The training is something I enjoy and is a passion.


‘‘My favourite quote is ‘lifting weights does not make girls bulky — it makes them strong.’


‘‘When my number was called I was so surprised and excited.


‘‘I came home with two trophies, new friendships and the pride that comes from finishing a goal.


‘‘A week later I’m still buzzing. Still scrubbing the last specks of fake tan off. And already planning my next one.’’