Is Kai Greene Sitting out the 2015 Mr. Olympia?

I have heard many rumors about Kai not attending the Mr. Olympia this year due to not being able to agree to a contract. Supposedly the deadline passed and Kai missed it. Is this all true? I am stunned that the guy who was so close would give up now. 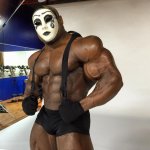 I've read online that he might have chosen an ESPN contract over competing at the Mr O. We'll find out more later this week, actually on Thursday at the Mr O press conference.

tkD said:
I've read online that he might have chosen an ESPN contract over competing at the Mr O. We'll find out more later this week, actually on Thursday at the Mr O press conference.
Click to expand...

Dam. The guy could have really Mr. Olympia and he throws it out for ESPN.. Not as dedicated as I thought he was.

No way do I want to see Kai Greene doing some sports commentary shit now in his prime.
C

He has to do what is best for himself - but I thought he could win Mr. O this year!
J

The latest I've heard was a disagreement between IFBB and Kai/his agent. Supposedly Kai's agent for his new company (Dynamik Muscle) wanted a FREE 20x20 booth to promote their product at the olympia. Thos cost 10's of thousands of dollars. IFBB said NO they have to pay sponsor dues like everyone else. Neither side budged, and the deadline was missed. His own fault if you ask me.
J

jozifp103 said:
The latest I've heard was a disagreement between IFBB and Kai/his agent. Supposedly Kai's agent for his new company (Dynamik Muscle) wanted a FREE 20x20 booth to promote their product at the olympia. Thos cost 10's of thousands of dollars. IFBB said NO they have to pay sponsor dues like everyone else. Neither side budged, and the deadline was missed. His own fault if you ask me.
Click to expand...

This is my understanding as well. It would seem to me that his agent probably told him do not worry they will give in and they didn't and now he is out in the cold but the big losers in all of this , IMO, are us, the fans.

I had a feeling it had something to do with Dynamic Muscle. If I was Kai I would fire his current manager or who ever is responsible for him not being at the Mr. O! How many bodybuilders own supplement companies? Too many to count. How many bodybuilders reach the highest peak of bodybuilding and become Mr. Olympia? Not many in comparison.

I just heard that Kai Greene and Isolator Fitness, Inc. Announced a Partnership for Betterment of Fitness Industry, what ever that is.

from dave palumbo of rxmuscle.com

"Kai “the Predator” Greene will not be allowed to compete in the 2015 Mr. Olympia competition. In a video released last night on Youtube, the top contender for Phillip Heath crown made the announcement that he was officially banned from competition.

Speculation abounds as to the circumstances behind this shocking story. One inside source claims that Kai Greene’s banning stems from his intention to release his new Dynamik supplement line at the Olympia Expo.

This source stated that Kai Greene asked for a free 20×20 Expo booth and was denied. When he was asked to pay for the booth, a standoff occurred and things escalted. The statements from this source have yet to be verified.

Update 10:44am EST: An updated report has come out stating that Kai Greene did in fact make an attempt to pay for a booth and had never asked for free space. This source is claiming that Kai Greene’s request was denied.

“I’ve got a chance to see a lot of emails and messages and things, talking about that, asking me about that. I just… This is what it looks like when a man is trying to be responsible.

Let me just say that behind the scenes there is just so much more things that are going on than I’m at liberty to share with you. There is a lot more that’s happening, and that is still in the process of happening that I cannot say.

It is a test of my resolve and my sense of personal responsibility to exist here in this moment, in this position, faced with this reality of what will be my inability to participate in the Olympia 2015.

My resolve has been to respond as a champion and just aim to represent the better thought of what that means to me.

I am not a victim. They are not going to break me. I don’t want to speak negatively to anybody, I don’t want negatively about anything else. Let me just say there’s more going on than I’m able to say.”
Last edited by a moderator: Mar 25, 2022

"For Everyone asking about the Kai Greene situation the Answer is Simple:

When you Fail to Sign the Contest Contract to Compete, you Eliminate the "Opportunity" to Compete.
The responsibility is soley upon the Athlete to Sign the Agreement to Compete or he is Denied the "Priveldge" to Compete after the Deadline passes. In this case, therein lies your answer to WHY Kai is no able to compete.
Kai is not Entitled to "Special Treatment" for making his Personal decision Not to Sign it for 2 months!
Sadly, Kai got what he deserved. This was Not "Politics.""
Last edited by a moderator: Mar 25, 2022

September 14, 2015
You’ve probably heard by now and yes, it’s true: Kai Greene is not competing in the 2015 Mr. Olympia. All outward appearances pointed to Greene, the runner-up the past three years, taking another shot at the Sandow. But in an online video released earlier today, Greene said he was “not going to be allowed to compete.” A tearful Greene went on, explaining that, “There’s just more going on behind-the-scenes than I am at liberty to say.” Perplexing, to say the least! Greene gave no concrete reason in his over 9-minute video, so FLEX reached out to Olympia promoter Robin Chang to see if he could shed some light on the Kai situation. Here’s what he had to say.
FLEX: Let’s get right to the point: is Kai Greene banned/prohibited from competing in the 2015 Mr. Olympia?
Robin Chang: Not at all! Kai has had his Olympia contract since April but refused to sign it for reasons known only to Kai. This is the same contract Kai has signed for the past 6 years. Nothing has changed but the dates. If he was banned from competing, why would we send him the contract? I’ve even heard he said he was banned from the expo! Are you kidding me?
FLEX: But from Kai’s video, it seems as if the decision was not his. Rather, the decision was made for him. And it was made recently, just a few days out from the show. There was no indication of this earlier in the year. Was there anything that was said to him that would lead him to believe that he was banned from the contest?
RC: The decision has always been Kai’s. If he REALLY wanted to compete, all he had to do was sign the contract and send it back to us, like he has done the past 6 years. The last time I spoke to Kai was with his manager about a month ago when they inquired about a booth at the Olympia. No indication that he wasn’t going to compete. I haven’t spoken to them since.
FLEX: Once a competitor qualifies for the contest, they have a certain time frame to sign the contract and return it to you, the promoter. And it's the same for all pro contests. Can you give our readers a brief breakdown of the contract procedure?
RC: Under the IFBB Professional League rules, a competitor has up to a week prior to the competitor check-in to sign his contract. The Olympia is a little different because it takes us an entire year to prepare for an event this size, so we ask the competitors to return their contract as early as possible so we can include them in various marketing materials. Without a signed contract, we can’t put a competitor on posters, ads, etc., as it would be misleading to the fans and ticket buyers. And let’s be perfectly clear here, the contract pertains only to the Olympia and competing in the Olympia. It is not binding to the IFBB Professional League as a whole or Jim Manion in any way whatsoever.
FLEX: When the date to return the signed contract passed, was there any follow up?
RC: The deadline was in May, but Kai asked for an extension, as some athletes do for various reasons. I granted Kai the extension so he had until early July. I’ve personally reached out to Kai numerous times, like I do with all qualified competitors, to remind them of the due date. I even reached out to his manager, his girlfriend and his supplement sponsor (at the time) to make sure he was aware of the deadline. I’ve also spoken to Kai on multiple occasions and reminded him that without the signed contract, I can’t put him on the poster or any marketing materials - and he won’t be allowed to compete. At one point, he even sent me a text stating “The contract is already as good as signed, faxed and in your office filing cabinet” but as of this interview, we don’t have a signed contract from Kai.
FLEX: And one day before the athlete check-in, still nothing?
RC: At this time, still nothing. Obviously, we would love to have Kai compete in the Olympia. He’s a great bodybuilder and a fierce competitor, and from a business standpoint it would be foolish for us to ban him. He has a huge fan base because his passion for the sport shines through, but for his own reasons, Kai chose to not sign his contract and not do the show. The decision was solely his, as it is for any and all athletes. While we will miss Kai, the Olympia will go on for the other 183 competitors who earned their way into the Olympia to compete this weekend.
Last edited by a moderator: Mar 25, 2022

Now it gets really weird. Either there is Musclemeds mixed in this story, and stops him with something, I don't know, or Kai is lying if the story from flexonline is true. Kai also posted a video on facebook saying that the IFBB and Jim Manion are not responsible for his "out of the Mr O problem" and he asked his fans to stop blaming and sending negative emails to Manion and co. Really strange now.
S

i dont see kai as the type of person that wants something given to him for free.
There is a lot more to the story. I doubt we'll ever know though.

Kai bar about going on with ESPN, dynamic muscle and the other me partnership with isolater fitness. I don't think anyone stopped him.
He said himself that we were looking at an irresponsible man in his video. That explained it as far as I'm concerned.

Why do I keep seeing stories that day Kai Greene was banned from the O? I not know what to believe.

Kai is not even at the event at all?

Flex Lewis vs Jose Raymond on the Olympia 2015 stage