Jay will be Mr.Olympia until he retires

Yesterday (may 31 2008) in Brazil Ronnie was at a seminar and had a few things to say about the current state of pro bodybuilding.


Ronnie Coleman said:
-"Jay Cutler will be Mr Olympia until he retires."
-"Victor, Dennis Wolf or Phil Heath will probally be inline to be next Mr Olympia after Jay Cutler.
-"There is a lot of politics inside bodybuilding, and Jay left the message that he only won the Olympia because of Muscletech."
Click to expand... 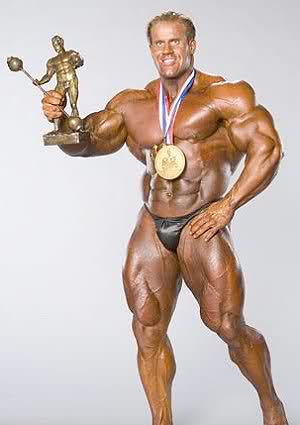 After last year this is old news

who would have known....

lol even though we all know it, it's nice to hear it from a prominent figure in bodybuilding.


still pisses me off though when there are far better and more deserving physiques out there.

No offence to all his fans, but I hope not. He brought it in 2006 but last year's was not his.

I'm not too sure about this one. I am sure the IFBB is feeling a lot of heat after last years decision. Knowing now that the sandow is in the hands of the wrong person, I dont know if they can hand it to undeserving hands again...

last year was shit yes i admit, being a big cutler fan. but EVERY Mr Olympia has had at least 1 that they didnt deserve. Just let 2006 be cutlers and leave it at that.

its good that he's talking bout the politics of the BB world.
R

I hope it's not true. Not just because if Jay is undeserving of further wins it'll be a joke but also because it's always less interesting when a new Mr 'O' only wins it once the throne is vacated rather than in a battle with the current holder.

For me it is a pity that Ronnie now brings up politics. Sounds like a bit of a sore loser to me. Never mentioned anything like that when he was winning. (why would he?)

If politics are / were involved like Ronnie says, does that mean that he thinks he didn't deserve some of his Olympia wins? (I thought it was in God's hands / God's will, Ronnie?)

sexnews said:
For me it is a pity that Ronnie now brings up politics. Sounds like a bit of a sore loser to me. Never mentioned anything like that when he was winning. (why would he?)

If politics are / were involved like Ronnie says, does that mean that he thinks he didn't deserve some of his Olympia wins? (I thought it was in God's hands / God's will, Ronnie?)
Click to expand...

If god exsisted jays abs would be symmetrical.

anyway, Hes not being a sore loser he Last year he got beaten by 3 dudes and hes not bitching about all 3 beating him. Just saying that the guy at the top shouldn't be there (which he shouldn't)
M

I don't understand how Ronnie comes with all that "politics" stuff.

It seems after 2007 Olympia controversy all Jay's past titles are "politics"? Grow up, guys.

Jay will win this year, he has at least 20lbs of MUSCLE his competitors do not have. In 2007 he had problems of conditioning, in fact that's his worst year (even worse than 2004) in that aspect. You should not expect him fucking up again his contest prep.

I disagree. 2006 might be enough to stave off the competitors, but 2003 certainly wouldn't. Jay may have 20+ pounds of muscle but he does not have the shape that his competitors have.

This year the competition will be fantastically intense. A very hungry and pissed off victor martinez. A Wolf who after his dominating show at last years has the scent of victory in his nose. Phil Heath, possibly the most genetically gifted athlete in the sport, and a hardworker to boot. Dexter "Perma-Shredded" Jackson who always comes in great. And then there are some wildcards, if freeman nails it he is quite impressive. Kai Greene could show up just a big as jay, he seems to grow everyday.

So this show is not a lock for Cutler. He f'ed up last year and badly. Now there are a whole string of very hungry competitors. If he can win this year, hopefully he deserves to. He got his gift last year. But he could pull what ronnie did between 02 and 03 and just make crazy gains. But he will have to bring his best ever package this year. A 90% jay will not be able to take a 100% Vic or a 100% Phil, or a 100% Wolf.