Lou Ferrigno $20 for an Autograph

Tell me Lou Ferrigno is not an IDIOT

Charging for an autograph? 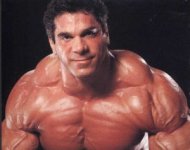 He is an idiot. Is line was so small every time I walked by his little booth.

you mean his non-existant line. With like one person taking a picture and him being a dick not posing or anything because he wants their money

if anyone has ever met lou in real life, they would know that he is a complete asshole!! such a shame.

His was the only picture I didn't want at the Expo. Same with Sergio Oliva. He's a nice guy, but he wouldn't let me get a pic of him, a decrepid old man, unless I bought a 15 dollar signed black and white pic. Although, he has more of a right than Lou does to charge...at least he was Mr. O.
D

he is not an idiot

what a douche.. I hope he spent more on the trip than he made

Lou used to give out autographs and pictures for free. I met him the first time in 1994 and he was super nice. Gave me an autograph, and took a picture with me and talked for a minute or two. Since then I have met him 3 other times and he has been as described, no pictures unless you buy something, but he has always been nice. I guess he just figured it was a way to make money, a lot of athletes charge for their autographs at events, so he decided to cash in. I don't think it is being a dick, it is just trying to make a dime. I think he could be nicer about the snaping a picture thing, but I understand it.