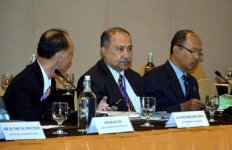 
"Drugs is a global problem and to wage successful war on drugs, we need to have cooperation and exchange of intelligence information," he told the media after attending the 38th Malaysia-Thailand Meeting on Narcotics Law Enforcement Cooperation, here, today.


The Thai delegation to the meeting was led by the Office of Narcotics Control Board (ONCB) secretary-general, Sirinya Sitdichai.


Mokhtar who is due to retire soon, said the arrest of suspected Malaysian drug traffickers by Thai authorities showed the efficiency, transparency and sincerity of its enforcement agencies.


He said the Malaysian authorities, meanwhile, would not let the country be turned into a place to import, export or produce drugs.


The Thai authorities made two significant arrests last April when it nabbed two Malaysians suspected to be responsible for several successful attempts to bring hundreds of kilograms of drugs into Malaysia.


The two men, Johor-born "Mr T" or "Malaysian Iceman" as the Malaysian media referred him and "Mr G" from Penang were arrested at Hatyai Airport and Bangkok's Suvarnabhumi Airport after extensive surveillance by the Thai authorities.


Meanwhile, Sirinya thanked the Malaysian authorities for their effort in foiling attempts to smuggle 55 tons of kratom and 22 kg of cocaine into Thailand.


Thailand, according to him, had requested assistance from Malaysia on the latter's expertise in fighting kratom, as it had more experience in dealing with the problem.


He said both countries faced problems related to drug smuggling and needed closer cooperation to ensure the success of their drug-fighting efforts.


This year's meeting was purposely held in Chiang Rai, situated in northern Thailand and which sits on the edge of the "Golden Triangle", a famous drug-producing region. — Bernama

Thanks for information bro
Similar threads