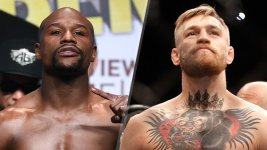 In the newspaper today is the news on the stalled negotiation between the camp of Floyd Mayweather and Conor McGregor. For those not familiar with UFC (Ultimate Fighting Championship), it is the premiere mixed martial arts league and McGregor is their biggest draw who was paid a handsome purse of $3 million in his latest fight. Floyd Mayweather is offering McGregor $15 million to fight him in the ring under boxing rules. However, McGregor wants to fight Mayweather using MMA rules, i.e. anything goes. And McGregor is willing to face Mayweather under boxing rules for $100 million.
Last edited by a moderator: Jan 16, 2017

The only reason that Mayweather wants to fight McGregor in a boxing ring is because he knows that under MMA rules he'll lose, and same for McGregor. He knows that if he steps into a boxing ring he'll also lose so I really don't see the point, or have any interest in this fight whatsoever. Boxing and MMA might both be combat sports but they are entirely different.

It's like having a NFL player going up against a EPL soccer player. They're both ball sports but require totally different skills and discipline. Millions of people like NFL and millions of people like soccer but that doesn't mean we have any interest in seeing the athletes compete on the same field.

For 15 million I will fight anyone anywhere.
P

The money being talked about is certainly going to make any of us 'normal' people think about taking a fight. While I think that both Mayweather and McGregor do still have a reputation to uphold they are both wealthy men, and I think that their reputation to them means more than an extra 15 million dollars. No matter what Mayweather as won in the boxing ring, if he did lose against McGregor then he would always be known as the undefeated boxer that lost against an MMA fighter so why would he take that risk?

For McGregor it may make more sense as he is the one that has everything to gain, but I don't think that even he would be able to take the humiliation if he lost in a huge match-up such as this, and because of that I think it is just all talk, and I very much doubt we'll see either of them in the ring together.
Similar threads