The much-hyped Floyd Mayweather vs. Conor McGregor fight has been scheduled for Aug. 26 in Las Vegas, according to two people familiar with the negotiations.

The two people spoke to USA TODAY Sports on condition on anonymity because the date had yet to be released publicly.

Mayweather is the favorite with an undefeated (49-0) record, but he has been retired since September 2015. McGregor, a two-division UFC champ, applied for his boxing license in Nevada recently and would have to adjust to a boxing-only fight.

The hype machine is going strong for this fight. It has been talked about for several months, even before it was confirmed to be happening. That, some in boxing say, is good for the sport.

"Without a doubt boxing is surging," Stephen Espinoza, executive vice president for Showtime Sports, told the Associated Press recently. "We see that in our ratings and in our digital traffic. What has become clear to those in the boxing industry is that in order to attract attention you've got to have signature, high-profile events."

Not everyone is a fan of this fight. Former champion Oscar De La Hoya wrote a long facebook post recently ripping it. He has called it a circus and said the reason for the fight wasn't good for fans

“Floyd’s and Conor’s motivation is clear. It’s money,” De La Hoya wrote. “But it’s also a lack of consequences for when the fight ends up being the disaster that is predicted. After this fight, neither of them will need us anymore. Floyd will go back to retirement — presumably for good this time with another nine-figure paycheck — and Conor will go back to the UFC.

“It’s a win-win for them. It’s a lose-lose for us. …We will have squandered another opportunity to bring boxing back to its rightful place as the sport of kings.” 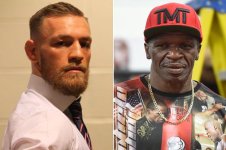 Post your Mayweather vs. McGregor news and updates here! musclemecca will do our best to cover this event!
Last edited: Jun 21, 2017

I am a filthy Irish animal.
Click to expand...

Looks like Arnold Schwarzenegger may be going to the fight!

UFC lightweight champion #ConorMcGregor already has Rocky in his corner, but what about the Terminator?


As the hype around Mayweather vs. McGregor continues to build up as the summer goes on, another Hollywood megastar is briefly chatting about the "money fight" of the century.


TMZ Sports caught up with Arnold Schwarzenegger to get his thoughts on the upcoming fight, and while he didn't say much, the former California governor's posse will at least be rooting for the underdog in this match-up.

Although he didn't outright put his support behind the Irish mixed martial arts champion, Schwarzenegger did reveal that he's willing to pony up the beaucoup bucks to witness the action between Conor McGregor and Floyd Mayweather Jr. in person when the fight goes down on August 26 in Las Vegas.


"I'll be there," Schwarzenegger told TMZ.


Well, that's at least one star confirmed for a seat at the pay-per-view battle everyone will be watching this summer.

Source for this news: https://champions.co/p/schwarzenegger-leaning-toward-mcgregor-in-mayweather-super-fight/4299577

I'll bet 5 vials of test that it'll be Mayweather who's winning, easily

I also think that Arnold Schwarzenegger will be on the side of McGregor during the fight against Floyd Mayweather. I had seen Schwarzenegger in the UFC although I don't remember if it was McGreogor's fight. It looks like there are more celebrities watching MMA than celebrities who are fond of boxing. For me, my money goes to Mayweather but it would be great (for an impossible upset) if McGregor will win. And if that happens, that will be good for both boxing and MMA.

An upset would be kind of cool.. Then we can have a rematch!
R

I really want to think that this is going to be a good and interesting fight. For whatever reason though, the cynic in me just thinks that it will turn out to be a dud like some of the other big name fights that we have seen recently. I guess we shall see, though.

Gonna be a quick fight.

rz3300 said:
I really want to think that this is going to be a good and interesting fight. For whatever reason though, the cynic in me just thinks that it will turn out to be a dud like some of the other big name fights that we have seen recently. I guess we shall see, though.
Click to expand...

I am a fan of Conor McGregor and I believe that he has the power in his left hand. But to think that the fight against Mayweather will be a boxing match, I don't think he can match Mayweather's boxing skills. I hope this fight will not go the way of Ali and Inoki fight where the rules were not strictly boxing. Inoki was on the mat all the time, giving Ali kicks in the leg and Ali couldn't do anything for how can you box a guy lying on the mat? But with the rules of boxing, I'm sure the audience will jubilate if Mayweather would knock out McGregor in the first round. And when the opposite happens then the crowd will surely be speechless.

I would let either one of them kick my ass for the money they are fighting for lol.

The first press conference of the Mayweather-McGregor fight was held yesterday and shown on cable tv today. As expected, lots of trash talk especially from McGregor who has the habit of fighting with his words. The coliseum was packed with 20,000 people who were expecting fireworks. It was a nice one although I have a feeling that the encounter was somehow scripted. The next press con is in Canada and next in another country for their press tour. They didn't mention the amount of purse but the promoters are expecting a good number o pay-per-view subscriptions.

So who is going to watch this? I am thinking about it but I am sure pay per view will be expensive.

I heard today that Mayweather is training much lighter than normal, which basically means he expects the fight to be a breeze, but the problem is that I do not believe a word that comes out of either of these two. I guess we shall see.

Let me add my opinion on the fight based on my latest observation. It looks like Mayweather is a vain person that he is very proud of his fight record of 49 wins in 5 weight classes. Would he allow his record to be spoiled by an unknown like McGregor? Simply put, McGregor is not in Mayweather's class. He was just lucky to have knocked out Jose Aldo in their featherweight match so he became champion. But the punchline is the promoter of the fight which is Mayweather Productions. Enough said?
P

I think it will be quick match

Guys get over confident too.

All it takes is one lucky punch and this could be the biggest upset ever. Im pulling for connor but like ive said before its mayweathers world. He will do like usal back step and punch the entire fight and win by decision or stopping it because of a cut

Just a few days from now and we will see this novelty of a fight between Floyd Mayweather and Conor McGregor. My take on it is a scripted fight to be won by the 2 fighters. And how will that happen? That's what we have to see. I don't believe that Mayweather will lose and I don't believe that McGregor will lose either. We well know the script when it is executed.
Similar threads