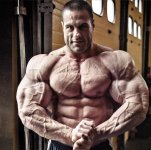 If you happen to be interested in bodybuilding, and let’s face it, if you’re reading this article then you almost certainly are, you won’t need us to tell you just how much of a big deal the Mr Olympia competition actually is. For those of you who perhaps aren’t quite as knowledgeable with matters regarding professional bodybuilding, the Mr Olympia contest is the be all and end all of competitive bodybuilding. The Olympia is the grand daddy of them all, the title that every single bodybuilder alive should be striving for, yet only a select few have ever won the contest, and ever will win the contest. Once you’re crowned Mr Olympia, you’re the best bodybuilder walking the face of the earth, until the following year where you will then attempt to retain your title. There have been some pretty awesome Mr Olympia’s in the past, and there have been some pretty terrible ones as well. If things continue the way they’ve been going however, the 2014 Olympia could be the most competitive yet. One competitor looking to make his mark is Evan “Ox” Centopani, who will be making his third Olympia appearance this year. Let’s learn a little more about Evan, and what we can expect to see from him, come September.

Who is Evan Centopani? – Evan Michael Centopani is 32 years of age and competes as an IFBB pro bodybuilder, hailing from Bridgeport, Connecticut. He stands at 5ft 11.5 inches tall, and can weigh anything between 260 and 300 lbs, depending on whether he’s on season or off season. Born in Bridgeport, Connecticut, Centopani has always been large, the only real difference is that when he was a child, the weight he was carrying was in the form of fat rather than muscle. For as long as he can remember, Centopani says that he was always overweight as a child, weighing over 100lbs whilst he was still in Kindergarten. He admits to being the “fat kid” that was always picked last during gym class. By the time he reached 12 years of age, Evan weighed more than 200lbs, causing teachers and his family members to become deeply concerned for his health. Due to his large size, as he grew older, his friends convinced him he would be perfect for football, and so he began training for football over the summer, and dropped over 20lbs in weight. He took to exercise like a duck to water, and it became his passion. He worked out religiously, doing a lot of cardio and dropping a shed load of weight, so much so in fact that he now had another weight problem, this time he was too skinny. In an attempt to gain weight, Evan began weight training, using his uncle’s weight set at his uncle’s home in the basement. He eventually signed up for a gym and began training smarter, and began training with a big guy in the gym of the name of Ron Rich. Rob convinced Evan to compete due to his naturally large size, and so he did, winning the 2005 NPC Bev Francis Atlantic States. From here on out Evan continued to dominate the NPC nationals, and was even signed by Muscular Development and Universal, two of the biggest names in the bodybuilding world.

Why is Evan considered such a fan favorite? – Head to any message board or forum relating to bodybuilding and the general consensus seems to be that Evan Centopani is one of the most popular bodybuilders currently in the sport today. The reason for this is because he’s such a humble human being. He’s semi-famous now, makes great money, graces the cover of the most famous bodybuilding magazines in the world, and has been sponsored by the most famous companies in the world, and all of this fame and success hasn’t gone to his head one bit. He’s a family man, he loves spending time with his family and friends, he doesn’t lead a lavish or rock star life, and above all else, he has a great respect for the sport that he’s in, and he’s incredibly humble, kind, and polite to each and every one of his fans. You can’t not like the man.

How will Evan do at this year’s contest? – That really is tough to predict. On paper, Evan’s resume is hugely impressive, with many of his shows providing him with top three finishes. Two contests that don’t however are the 2012 and 2013 Olympias, where he placed 8th and 13th respectively. He has the size and if he can nail his conditioning, he could very well crack the top 7, which would be hugely impressive. Personally, I see him placing 11th, but only time will tell.