Michael Kefalianos, 20 Then, Over 20 now

Michael Kefalianos, 20 Then, Over 20 Now, More Chances To Win 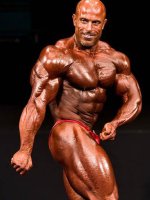 Dual-national Michael’s - face and body structure (spelt Michalis in Greek) is no longer news to the piercing, dashing cameras across the different globe’s bodybuilding events. He has featured in a great deal of competent shows, which could have passed for countless long enough for him to have been nicknamed The King of Conditioning.
It was a military Michael betrothed to his love, Helen, daughter of immigrants from native Kos that bowed out of the mandatory home country Greek Army service into the waiting tough hands of the muscle-building game at the budding age of 20.
Born in Kos Island, Greece, 16th of August, 1970, his has been a career not void of the characteristic challenges experienced by pro bodybuilders across the world. Starting from a home country gym owned by his friend and personal trainer, David Balassas, Michael has on different occasions won the Mr. Hallas, Mr. Aegean Grecian national bodybuilding outing, the WABBA Pro World Championship, 2007 and the 2008 International North German Championship, all as an amateur.
Welcome to the mesmerizing world of Michael “The Spartan” Kefalianos.

Lifting into Limelight
November 22nd, 2008 saw the tiny Michael shoot for the first time into the international murky waters of bodybuilding – where the results only favor the best.
Michael competed and won the Hamburg International North German Championship in which he never considered it dishonorable enough to beat the established IFBB pros to their game by clinching himself the IFBB pro card by that singular win.
Armed with the pro tag, there has been no looking back for Kefalianos. Moving back to this second home country, Australia, it was time to chew the pills with the heavyweight thus winning his qualification for the most celebrated bodybuilding event the world over; the Mr. Olympia contest at the 2009 IFBB Australia Grand Prix and becoming the first Greek bodybuilder to represent at the Mr Olympia in Las Vegas.
The global event had a lot of funny surprises for him, just like many others; he got his first check when he represented Australia and ranked at far-beneath 16th with a fellow contestant in September 2009 at the IFBB Mr Olympia contest. He then went on to clinch the 11th position at the IFBB New York Pro, same year.The following year even made matters worse – his name was not even on the ranking sheet!
Not one to say never, his qualification of the 2011 Mr Olympia came through courtesy of that year’s IFBB Australia Grand Prix also. 2012 however proved more involving and adventurous for Michael. He ranked among the top 10 at the Arnold Classic in Ohio, his first outing at that event, when he grabbed the 9th position. Three months later, only muscle-model Branch Warren was strong enough to run away with the night’s overall title when he ranked as the 1st runner up at the Australia Grand Prix, thus qualifying him for his 3rd shot at the Mr Olympia.
Perhaps the Grand Prix served as a pre-cursor to his first monumental career win; because Michael went on to win the overall title at the 2012 Mr Europe in far away Madrid, Spain. It was April 28 of that year, and the best win so far of his entire career.
How undulating this game can really be!
The 2012 IFBB Mr Olympia landed Michael in a shabby 16th position and he only had to compete in 4 other outings last year to compete the streak of his not-too-superlative performances considering a person of his professional standing, clinching 5th, 8th, 9th, and 6th respectively, all within the top 10 list to end the year.
This year, he has competed in only two competitions; the 213 IFBB Arnold Classic where he clinched 12th and the IFBB Australian Grand Prix in which he ranked 6th.
He has been sponsored as a pro bodybuilder by national Greece fitness brands, Health2Day and Bodybuilders.gr, both based in Greece, and the Maximum Human Performance over the pace of 2 years from September 2010 to December 2012.
Currently standing at 5ft 6in. (1.68m) and weighing 250 lb (110kg), Michael has competed in well over 20 pro bodybuilding contests and currently lives with his wife and four children.
Perhaps the real way to capture Michael’s professional profile will be to say that he started out at a promising 20 years of age into that interesting game, has featured in well over 20 appearances to his name, yet still got such a wide ground to cover as a pro who wishes to get his name really written in clearer gold of the game.