Mr Kashmir on bodybuilding in the Valley

Mr Kashmir on bodybuilding in the Valley

If you wear a t-shirt, people think you’re pretentious
Click to expand...

Bodybuilding is a seasonal sport here
Click to expand... 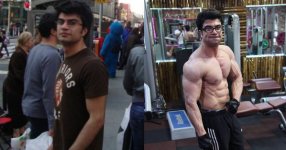 “I thought, at least a t-shirt should fit me,” said Hammad Wadera, laughing. He was thinking of the time back in 2013 when he weighed a scrawny 54 kilos and his clothes sat loosely on him. Today, the muscle-bound Mr Kashmir has no sartorial complaints: t-shirts fit him snugly enough.


Wadera returned to India after graduating in international business administration from the State University of New York in 2011. College life, he said, left him with no time for gym. He started working out in an “average gym” in Srinagar in October 2012. Even then, the idea of competitive bodybuilding had not struck him.


That came to him as he watched a Mr Kashmir bodybuilding event in 2013. “I had a feeling to try it.” The 30-year-old competed in the event this year, and on May 15, was crowned Mr Kashmir by the Srinagar District Bodybuilding Association in the 80 kg category.
Building a body


Bodybuilding is not easy – it requires a strict workout regimen, nutrition regimes – but particularly so in Kashmir. “We don’t have proper nutritionists or trainers here,” Wadera explained. “Or even proper nutrition, in terms of food varieties.”


The lack of proper gym facilities in the Valley meant Wadera had to improvise at every step. “We don’t have a proper decline bench [a bench with adjustable inclination to lower the head, and a metal frame to support a barbell] here,” Wadera said. “So we use a Smith machine [a benchless steel structure with rails allowing for vertical or near-vertical movement] with a simple reclining bench.”


To further improve his technique and workout, Wadera started reading about bodybuilding. “I got the book, Encyclopedia of Bodybuilding, by Arnold Schwarzenegger. It was the first book I read about bodybuilding. It has an old school workout routine.” An online course in comprehensive sports medicine and nutrition helped him further in his workout.


Bodybuilding events in Kashmir only started as recently as the 1990s. But in contests outside the state, Wadera said, there “are trials and if your physique is good enough, you get to compete”. In Kashmir, it was straight to the competitions.


For all that, in a state where the youth form the majority of the population, Wadera said, there are hardly 60 competitors. “That amounts to almost nothing, given the huge population.” Wadera is financially secure – a family-run hotel allows him to give time to his passion. “There are no professional bodybuilders here who can dedicate the time. Many here can’t do it because they can’t manage a job and gym. It’s a full-time profession.”


The Valley’s gym culture, Wadera said, is seasonal and lax. “People come to gyms in summers,” he said. “As the weather turns cold, people pull their sleeves down and give up on the gym. Also, many can’t afford beyond Rs 500 a month for a gym.” The better gyms in Srinagar charge Rs 1,500-2,500 per month.


In other towns and villages, there are social misconceptions about the sport, Wadera said. “People think bodybuilding is all about intake of supplements. To look like this, all you need to do is take supplements. Also, if you’re wearing a T-shirt, people think you’re pretentious.”


In 2011, various bodybuilding associations across the country were merged into a single representative body with registered units at district levels. The same year, the district association in Srinagar organised a competition after a brief gap since the early 2000s. Since then, gym culture has been picking up, said the association’s treasurer, Sajad Khan. There are about 150 bodybuilders across the Kashmir division, according to Khan, who are capable of competing.


“Between 2011 and today, there has been a huge difference,” Khan said. “Not merely in terms of number of participants but the quality of the competition.” But he added that, despite the improvements, the talent is yet to travel outside the Valley. “For some reason Kashmir’s bodybuilders do not compete at higher levels. Few have done so far,” Khan mused.


He blamed a lack of awareness, but also observed that two or three gyms come up in Srinagar every month. In the next Mr Kashmir title event, Khan said, they are aiming to put a new system in place in addition to the current individual entry. “We are discussing a mechanism where local gyms and clubs would send their candidates, who will represent their gyms in the competition,” he said.


Three district-level bodybuilding competitions are scheduled in the months ahead: on July 30 and August 6 in Ganderbal and Budgam districts, and on August 20 in Baramulla district. A Mr J&K title event is scheduled to be held on October 8.


Khan added that his association is attempting to conduct the national north zone title events in Kashmir. “It will be for the first time. We are hopeful that it will happen.” Meanwhile, Wadera is preparing for the Mr J&K title event this October, dedicating himself further to a sport he feels is “underrated in Kashmir”.
We welcome your comments at letters@scroll.in.