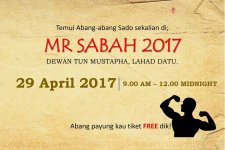 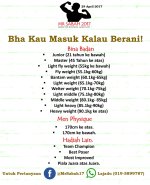 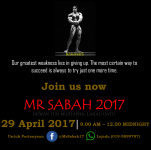 LAHAD DATU - A total of 150 bodybuilders statewide will compete for the Mr. Sabah 2017 title which will take place at Dewan Mustapha, here on Saturday.

Lahad Datu Bodybuilding Club chairman Lajadu Yusuppu said competition is expected to be stiff since it will involve several bodybuilders who have won titles in previous competitions.

"The final preparation is being made and those who have not confirmed their participation should do so since Mr. Sabah 2017 will be the best competition," he said after presenting contributions from Lahad Datu State Assemblyman Datuk Yusof Apdal to eight bodybuilders from Lahad Datu who will represent the district to Mr Sabah 2017, here, today.

It is expected to be opened by Sabah Youth and Sports Minister Datuk Tawfiq Abu Bakar Titingan.