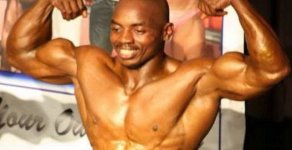 Dlodlo who won the title last year, flexed his muscles in a stiff completion which featured Lovemore Munyamana and prosper Mugariwa, who came second and third respectively.
He walked away with $500, with Munyamana and Mugariwa got $300 and $200 respectively.
Blessing Sithole was crowned the men’s physique champion in a category that saw Pardon Dube and Genius Gwara coming second and third.

In the men’s fitness category, Chamunorwa Marange emerged the winner, while Marko Mwale was crowned Wheel chair men bodybuilding winner
National Federation of Zimbabwe Bodybuilding and Fitness National development secretary Keith Chirimanzi expressed satisfaction over the performance by the participants.
“We would like to start by thanking our sponsors for making this event a success and we are hopeful that we keep on working with them in future competitions. The event was well organized and the quality of athletes was amazing.”

“Our focus has now shifted towards Arnold classics and we are appealing for government support so that we can be able to send a team to South Africa for this tournament. This ZITF contest was a preparatory function to prepare for this huge event,” he said The Arnold classics Africa is the biggest sporting event on the continent with participants from across a wide range of sporting disciplines. It is the brainchild of the famous Hollywood star and actor Arnold Schwarzenegger.

Congrats to Ndumiso Dlodlo for winning Mr Zimbabwe two times in a row. The competition and perfomance of Lovemore Munyamana and Prosper Mugariwa was a quality one and they deserved the win.
H