Anyone play texas hold em poker here besides max_ot_mass? I've never played with anyone I know online, looking to find people. If so, where do you play? I havn't been playing very long, but I must say I'm pretty good.

I am downloading partypoker, Ill play with you online when I can.

Since when is poker for losers?

This one is even better, I have no idea how he made this read.

I play on pokerstars dude, my name's WildcardGray.

The first hand wasn't that hard to read, when there's a 4 card straight on the board and you get check raised it's pretty obvious what they have. As for the second one, Daniel might of picked up a tell from the other player, combined with the fact that he raised Daniel it could of led him to that assumption, but it's still a hell of a read. The third one, well, I have no idea. it was unbelievable. When Doyle Brunson says your good, I think that'd be a highlight in any serious players career.

Yahoo has a pretty cool Texas hold 'em game. Also, if you get a Facebook account, they have a Poker application where you can play against other people online.

Chesticles said:
I play on pokerstars dude, my name's WildcardGray.

The first hand wasn't that hard to read, when there's a 4 card straight on the board and you get check raised it's pretty obvious what they have.
Click to expand...

That's not the point, obviously he had a straight. But it's the fact that he called his EXACT hand (K,9).

Paulie said:
Yahoo has a pretty cool Texas hold 'em game. Also, if you get a Facebook account, they have a Poker application where you can play against other people online.
Click to expand...

if anyone 's keen

This is the poker brat Phil Hellmuth. I love how he calls the other player a maniac for calling against Hellmuth's AQ when he actually has a better hand.

^^ haha! soo funny! That guys an asshole... I could watch him lose money all day!

Lol at the guys who play on facebook, that poker is horrid.

This is why Ivey is one of the best:

Phil Ivey is the greatest. Negreanu (however the fuck you spell it) is also amazing.
V

i play on bugsys club. not as crowded as pokerstars and all those other ones.

I just made a beautiful play to end and win a tournament on FullTiltPoker head-up.

I flopped the best possible hand, a 10-high straight. I check with the nut straight. He bets the pot of 600 chips, I just flat call to induce more betting. 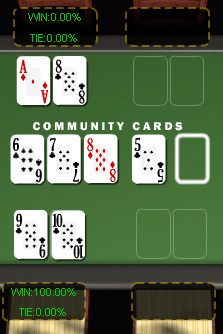 Great card for me, as it makes it more likely he makes a lesser straight and in the mean time gives me a flush draw.

I check once again with the nuts, he makes a large bet of 1,200 chips, once again I just flat call.

Not my favorite card, as I'd be chopping the pot if he held a 9 in his hand. It also creates a hand that could beat me if he was semi-bluffing the flop and turn with a J-9 open ender straight draw. However, I was still sitting very comfortable with the 2nd nuts.

I check for a third time with my straight, then finally he puts all his chips on the line. I make an insta-call and it turned out he flopped top pair/top kicker.

I played the hand exactly the same way Matt Damon played it in the movie Rounders against KGB.

Here's another hand I played pretty well in the same tournament.

I flopped the 4th possible nuts, a set of 10's and more than likely the best hand three handed.

I bet out on the flop and receive one caller. (Player 2 folds)

The worst possible card I could be hoping for on the turn is dealt, the ace of spades.

I make an good check on the turn, hoping for a K, J, A, or 10 on the river to pair the board and give me a full house.

1.) Prevents a re-raise if he holds a queen in his hand, thus I can see the river and hope for a full house.
2.) If he does hold a queen in his hand, he'll think I'm weak since I made a small bet on the river and checked 4th street. The reason why I want him to think I'm weak is so if I don't make my full house, he won't bet as much on the river to attempt to get a call. Thus, I don't have to pay as much to find out I'm beat. I can tell you right now, the last hand he thought I had was a set of 10's.

Now on the river player one bets out fairly small. I make an obvious call, because he might make the same play with A-6 or J-4 for example. Also gives me some information on how he plays.

There are two reasons you would never re-raise here...

1.) It's fairly obvious of the possibility of a queen in his hand.
2.) As long as he's a good player, he won't call a re-raise if he can't beat three 10's with four cards to a straight on the board.

Player 1 shows K-Q offsuit with the nut straight. Now some of you may be thinking "well dude, playing the way you did is standard!" You have to remember I was playing online, where most people would make an enormous bet as soon as they make the nut straight on the turn. Now this may be a pretty standard play on my part, but can you honestly tell me you've ever flopped a set, lose the hand, and only lost a total of about 600 chips? (blinds were 50/100) (notice at the bottom of the picture that he wins 1,250. However, about half of the pot were his own chips so he only won close to 625).

Moral of the story, I lost the very minimum possible for this kind of hand.

Whats the best site to play free online poker? Been to a couple but cant be bothered d/ling and signing up if its going to be crap. So which site is overall probally the best?

I'd say Partypoker is NOT one of the better ones.
Bad playing options and table choices/blinds if you ask me.