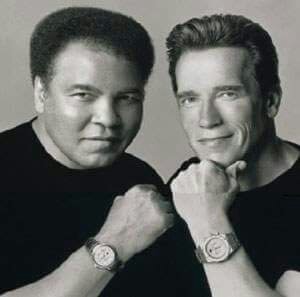 "The Greatest", Mohammad Ali died today at 74 years old. He has had Parkinson's disease for over 30 years and has been having respiratory problems.

Mohammad Ali was a boxing legend.

Check back here for more.

Just an update: Mohammad Ali died of septic shock. His family said that was the cause of death.

Rest in peace The Greatest!

Crazy dude but one of the best boxers.

I just heard Lennox Lewis and Will Smith will be among the pall bearers for Muhammad Ali.
Last edited: Jun 6, 2016

Dam. Another legend is gone.
D

I just read a book about his friendship with Malcom X. It was really very tragic as Muhammad Ali chose Elijah Muhammad over his old friend and then lived in fear for years after Nation of Islam gunned down Malcolm X.

One of the cool things about the book was how it described Muhammad Ali's fighting style. He wasn't the biggest fighter but he was one of the fastest and he was also one of the trickiest fighters. He didn't get into rope-a-dope until he was older but he had some great moves in his younger days.
T

A great and dogged fighter, a legend gone. Continue to rest in peace Mohammed Ali.

I do wonder what sort of infection he had to die of septic shock. A sad life with 30 years of disease of a great if not the greatest champion. His name will be remembered forever.


TalkAdmin said:
Just an update: Mohammad Ali died of septic shock. His family said that was the cause of death.
Click to expand...

to7update said:
I do wonder what sort of infection he had to die of septic shock. A sad life with 30 years of disease of a great if not the greatest champion. His name will be remembered forever.


TalkAdmin said:
Just an update: Mohammad Ali died of septic shock. His family said that was the cause of death.
Click to expand...

The only way to get septic shock is by injection?

What you think? Ali would have kicked Arnies ass in a fight?

Haha, no question he would, I mean, Arnies had and still has a good body, but from there to be a good fighter is a whole new level.

@KaiGold, I thought septic shock was a generalized infection from the body?
P

Having boxed a little myself in the past and having always been a fan, I think although it's a lot closer than people think, Ali was the greatest that as ever lived. Some people say that because he never had an unbeaten record then he can't be, but for me the fact he did lose and come back to reclaim his titles just affirms even more that he is. It's one thing winning a title for the first time, but it's even harder to win it, lose it but then win it back, and that to me shows the heart of a true champion.

Interesting that you say it was closer, who would be number 2 for you @pwarbi? Quite true what you say, it's "easy" to get to the top, it's way harder to fall from there and climb back up, so certainly a lot of merit from him because of that.
R

I sometimes forget about this loss of the last year. 2016 seems like a particularly tough year when it comes to losing some good people, but this one seems to escape me and I feel bad about it. I was not around to really see him in action, though, so that might play into it.
D

I had seen several of his fights and was there to witness his popularity worldwide. He is definetely one legend who will be missed always.
G

Did Muhammad Ali pass away this previous year? I had not even heard about it. I did not follow him much, personally, but I believe that one of my parents' dreams was to meet him in person one day soon. This is too bad....
G

One of my biggest motivator, and still watch him on Youtube till know.
Similar threads