Ronnie Coleman is and was a great representative for bodybuilding and a great role model. I'm really glad we have Shawn Rhoden now. I think he is the same way as Ronnie. These are both really good people in this sport. 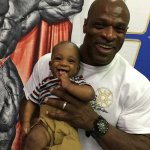 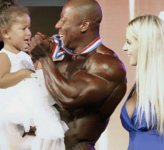 Ronnie Coleman on the road to recovery! He is in the gym again 2 weeks after major surgery! Hope you are reading this TalkAdmin!
[instagram]BofiHHdBUWE[/instagram] 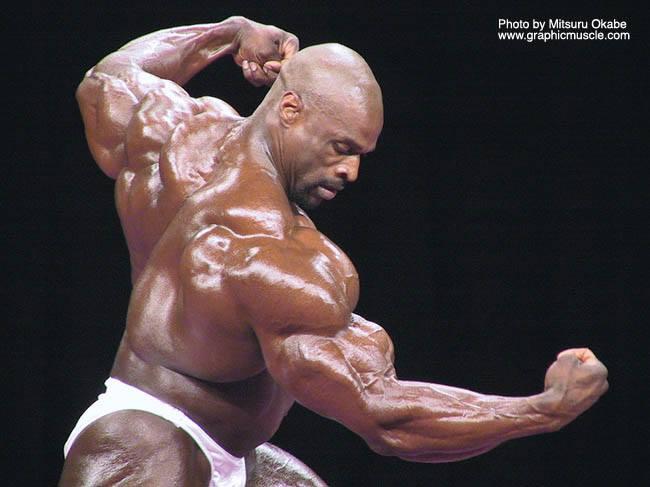 The King Of Lurkers said:
Ronnie in 2001

Here are some new Ronnie Coleman pictures from 1998! Chad Nicholls just released these!
"Here are some never before seen photos of Ronnie at the very beginning stages of our working relationship. I’m not certain of the exact date of these – the date on the photos is incorrect – however, I believe these are approximately pics that were taken around 3-4 weeks out of the 1998 Night of Champions. I wanted to post these, not only because Ronnie’s physique was truly amazing during all stages of his career, but these are the exact photos – just as I received them in the mail. As you can see they aren’t the best lighting – shadowed, some are dark. This is before the digital camera, before any type of filters and all the craziness that we see people doing with their pics now – and it’s well before the age of skype, facetime and all the types of video conferencing that are now available. So it was really important that the photos were to be taken in the exact same place with the exact same lighting each week (to compare photos) – but you also needed to take pics outside to get different lighting so that you could see different things happen to the body.
One would think it would be much easier to prep an athlete now – and in certain ways it is because of all the modern technology now available, but there was also something pure and exciting about the old school process. Everything had to be very structured – strategically planned, just as it is now, but I think the old school way eliminated “over-thinking”. Now there is so much information available with videos, digital photos, filters, etc – and with social media there is so much of this that I think you see the athlete too much – so much to the point that it’s just too easy to over think EVERYTHING. –" Chad Nicholls 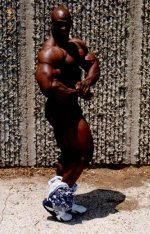 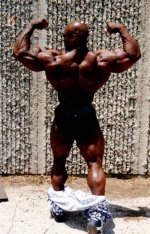 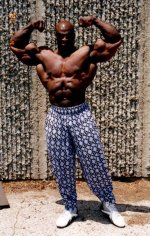 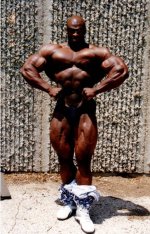 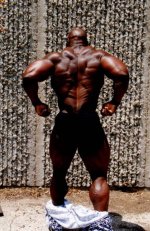 OMG That is terrible! Ronnie Coleman literally have everything to you sport.

Ronnie is a fighter and I know he will get through this.

Thanks for posting bro. I hope it proves to be wrong though.

Ronnie bought this bus a few years ago and he actually used it to drive around in! Can you imagine Ronnie Coleman picking you up from school in this bus? His kids are lucky!
[INSTAGRAM]BpXx92dgaco[/INSTAGRAM]

Man I wish we could get Ronnie Coleman back here. I love that guy. Nothing ever gets him down and he keeps pushing and pushing. What a role model.

There is a documentary on Ronnie on Netflix called The King. I haven't seen it yet but I can't wait!

Ain't Notin' To to it but to do it! Yeah buddie!
Click to expand...

Ronnie Coleman working out on Christmas! I would work out with you Ronnie any day. Just call and I am on a plane right away!
Last edited: Dec 27, 2018

Ain't Notin' To to it but to do it! Yeah buddie!
Click to expand...

Ronnie Coleman working out on Christmas! I would work out with you Ronnie any day. Just call and I am on a plane right away!
Click to expand...

I know bro. I wish he would just rest a little and heal up.

I don't know if anyone saw Ronnie Coleman on Netflix but but is it boosting his supplement business! 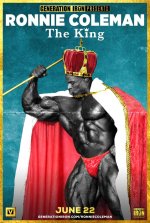 Over the past two years RCSS has put a huge focus on both the direct to consumer and Amazon sales channels in the U.S. Both platforms are equally important according to CMO Derek Ciocca: "If you're not focusing on Amazon by now, you have the wrong strategy. 1 in every 3 searches for consumer goods STARTS on Amazon. However, being able to have full control over the full customer experience and really engaging with your customers through a direct model is just as important as a strong presence on Amazon. They work together to enhance brand loyalty and awareness."
Mr. Coleman also released his first ever documentary, produced by Generation Iron, chronicling his illustrious bodybuilding career with a rare look into his personal life today as a business owner, father and his recovery from multiple back surgeries. Titled "The King," Ronnie's nickname within bodybuilding, the documentary hit iTunes, Amazon Prime Video as well as Netflix. At one point during the peak of the release, "The King" was number 1 in each platform's documentary section. On the success of the movie, Ronnie said, "I never thought in a million years that I would be Mr. Olympiaand I sure as heck didn't think I would ever have my own movie that millions of people wanted to watch. It's still really humbling and I'm forever grateful to the best fans in the world who've helped make me who I am."
Ronnie and his company have always kept it real with the fans and customers which has endeared so many to his brand of supplements over the years in an industry where there are a lot of gimmicks and people looking to make fast money as well as an overwhelming amount of brand choices. Ronnie and the popularity of the brand can be seen on social media where Ronnie just cracked 500K subscribers on YouTube and 3 million followers on Instagram.
So what's next for the brand as we roll into 2019? Well, you can expect new product launches from flavor extensions to totally new items as well as the launch of an official clothing brand tied to RCSS. The first test release for the clothing brand, titled the 'Icon Collection,' dropped over Black Friday and is off to a great start. Some of the products include a new testosterone booster aptly named King Test, a new fat burner, Light Weight Baby, as well as a really interesting functional food product named King Cake.
King Cake is a high protein cake snack that only requires you to add water and zap it in the microwave for 60 seconds. Out comes a high protein, low sugar cake snack that is hot and ready to enjoy. CEO Brendan Ahern thinks this will give consumers a great alternative to traditional protein bars, "Look protein bars are great, we make one and love it, but it's nice to have an alternative in your high protein healthy snack bag. King Cake provides a convenient alternative to traditional bars and I mean come on, it's cake! This is a new category within functional foods and we are very excited to be one of the first to explore it. Big potential with this one."
Look for RCSS to have another successful year of growth.
To learn about Ronnie Coleman Signature Series visit RonnieColeman.net
Last edited by a moderator: Jan 18, 2019

It's emotional if you love Ronnie like I do.

Prayers for Ronnie as he heads into surgery after a bad fall!
Repost from Ronnie Coleman Hey guys this is not a repost, I’m in the hospital again getting ready for another surgery. About 2 months ago I had a hard fall at home which herniated a disc in my neck. So today I’m doing a level 3-4 fusion of my cervical spine. Dr says this disc is pressing really hard against my spinal cord so surgery is definitely required. Oh by the way I did get a second opinion within days apart from 2 different spine surgeons and they both told me the same thing. I needed surgery in the next few days. So here we go again, say a prayer for yo boy. 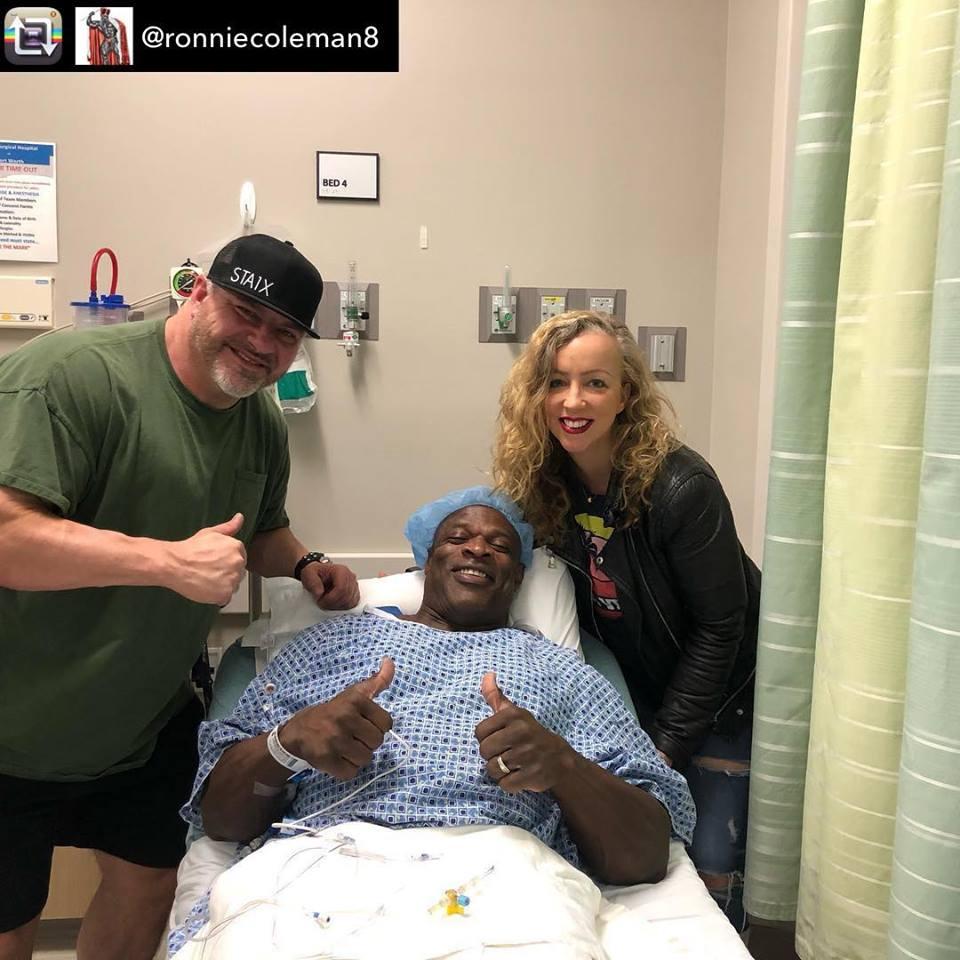