Russian 'Popeye' bodybuilder, 25, is warned he faces 'death' unless he removes lumps of hardened petroleum jelly that he injected into his biceps to look like a superman
Ex-soldier Kirill Tereshin, 25, used 6L of synthol to turn himself into 'Superman'
The petroleum jelly then hardened his biceps, making them artificially huge
But Mr Tereshin was warned he could die or face amputation if it wasn't removed

An ex-Russian soldier nicknamed 'Popeye' has been warned he faces death unless he has lumps of hardened petroleum jelly and dead muscle surgically removed from his artificially huge biceps.

Kirill Tereshin, 25, used injections to show himself as a superman but is now paying the price which may include losing the use of his arms, or worse. He has already had his fake triceps removed in a prior operation but now faces the first of multiple surgeries to get rid of dangerous giant implants from his biceps. The six litres of petroleum jelly, named synthol, that has been injected into his body has saturated his muscles and penetrated the skin tissues and skin itself - meaning it blocked the blood flow and left Tereshin with a fever and pain.

Surgeon Dmitry Melnikov warned the ex-soldier bluntly: 'The risk of complications in this case is very high. But inaction will not help the patient.
'A toxic substance in the body long term can complicate the kidneys and lead to death.'
Former army conscript Tereshin injected three litres of synthol into each of his arms
After his life-saving surgery, Mr Tereshin retain movement in his arms but his fake bulked up muscles will be gone forever.

The procedure is set to remove the hardened petroleum jelly he had injected into his left arm.

'Soon I will have a very complicated, hard third surgery,' he said.

Tereshin also admits he has to 'get rid' of his self-inflicted 'nightmare'. 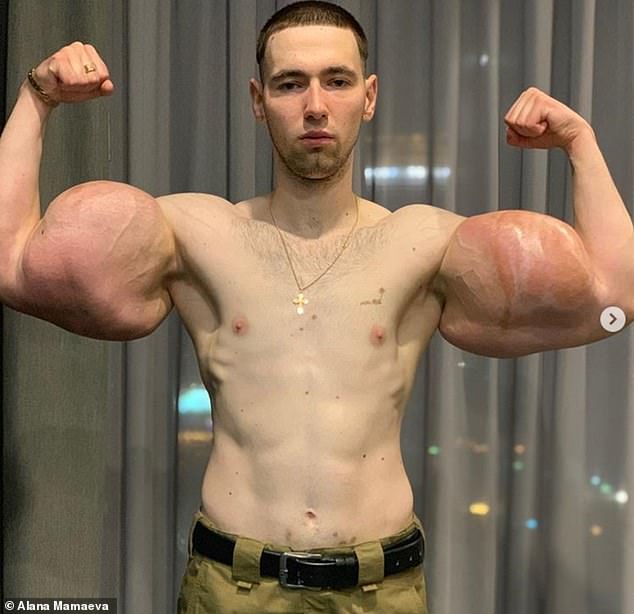