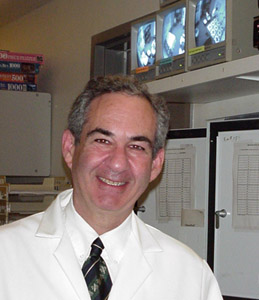 Although it’s a common belief that 8 hours of sleep is required for optimal health, a six-year study of more than one million adults ages 30 to 102 has shown that people who get only 6 to 7 hours a night have a lower death rate. Individuals who sleep 8 hours or more, or less than 4 hours a night, were shown to have a significantly increased death rate compared to those who averaged 6 to 7 hours.

Researchers from the University of California, San Diego (UCSD) School of Medicine and the American Cancer Society collaborated on the study, which appeared in the February 15, 2002 issue of the Archives of General Psychiatry, a journal of the American Medical Association.

Although the data indicated the highest mortality rates with long-duration sleep, the study could not explain the causes or reasons for this association.

But, he added “individuals who now average 6.5 hours of sleep a night, can be reassured that this is a safe amount of sleep. From a health standpoint, there is no reason to sleep longer.”

Kripke is also a member of UCSD's Sam and Rose Stein Institute for Research on Aging.

The study, which addressed sleep issues as part of the Cancer Prevention Study II (CPSII) of the American Cancer Society, also indicated that participants who reported occasional bouts of insomnia did not have an increased mortality rate, but those individuals who took sleeping pills were more likely to die sooner.

“Insomnia is not synonymous with short sleep,” the authors said in the article. “Patients commonly complain of insomnia when their sleep durations are well within the range of people without sleep symptoms.”

They added that physicians believe most patient complaints about “insomnia” are actually related to depression, rather than a diagnosis of insomnia.

With 1.1 million participants, this was the first large-scale population study of sleep to also take into consideration variables such as age, diet, exercise, previous health problems, and risk factors such as smoking, in comparing longevity among the participants. In other words, individuals with specific characteristics were compared with individuals of a similar age, health background, etc.

Although the study was conducted from 1982-88, the sleep results have not been available until recently due to the length of time required to input and analyze the vast amount and variety of data from the 1.1 million participants.

“Previous sleep studies have indicated that both short- and long-duration sleep had higher mortality rates,” Kripke said. “However, none of those studies were large enough to distinguish the difference between 7 and 8 hours a night, until now.” 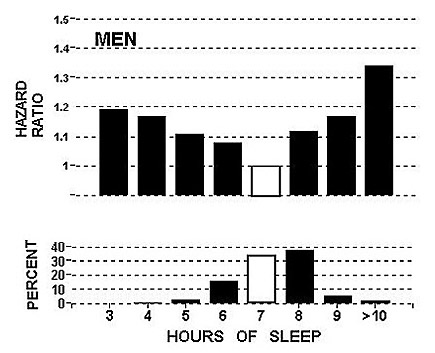 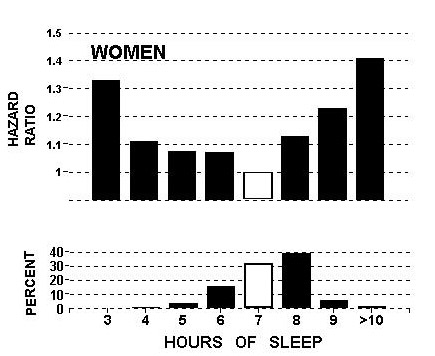 The figures above indicate hours of sleep for men (left) and women (right). The hazard ratio, the top bar graph, indicates the mortality risk while the bottom graph shows the percentage of subjects associated with the reported number of hours sleep.

The best survival rates were found among those who slept 7 hours per night. The study showed that a group sleeping 8 hours were 12 percent more likely to die within the six-year period than those sleeping 7 hours, other factors being equal. Even those with as little as 5 hours sleep lived longer than participants with 8 hours or more per night.

Data came from the American Cancer Society with analysis supported by the National Institutes of Health.

Links to printable versions of photos and graphs:

i agree, 7 hours of sleep is more than enough. thanks for the info bro

The original science was more interesting and there have been other studies since. Pretty much it isn't the hours of sleep as much as the hours of REM that you get, if you need 4hrs to get your full dose of REM (unlikely but some people can) then that is all you need, some people may need 9-10hrs. Anything else impacts on your ability to lead an active and healthy life.
R

^so how can you measure when you have enough REM sleep??

^^ Well outside of a sleep lab you can't (my housemates used to work in one and it is not an easy process to measure).

Pretty much you should awake feeling refreshed. You shouldn't feel over tired or like you have slept too little or too much.
R

I think its the opposite. Health researchers indicate that death can
result from sleep deprivation in a week as the body lacks rest. When
you sleep less, the amount of sleep required becomes a deficit and
accumulates. I read an article to the effect that some sudden deaths
result from cumulative sleep deprivation. But I am into cutting my
hours of sleep.