Carbohydrates are essential in reaching body building goals. They help our bodies in health and fitness. What are some of the sources of carbohydrates that we can incorporate on a daily diet to maintain their intake and also their benefits in our bodies?

There are other sources too and they can be healthy or unhealthy foid stuffs.
G

Consume carb that has low sugar in it, such as brown rice.
V

Carbohydrates must be consumed until 6 P.M because after this hour our body metabolism slower. Moreover, carbohydrates with low glycemic index are important for a health life style to keep our meal in 3 by 3 hours.

That's the thing, we need to go low on sugar because sugar destroys pretty much everything that we eat, it's that harmful, sometimes it's even like a poison.

lmao. that brings us to this study. check it out.

Refined sugars (e.g., sucrose, fructose) were absent in the diet of most people until very recently in human history. Today overconsumption of diets rich in sugars contributes together with other factors to drive the current obesity epidemic. Overconsumption of sugar-dense foods or beverages is initially motivated by the pleasure of sweet taste and is often compared to drug addiction. Though there are many biological commonalities between sweetened diets and drugs of abuse, the addictive potential of the former relative to the latter is currently unknown.

Here we report that when rats were allowed to choose mutually-exclusively between water sweetened with saccharin-an intense calorie-free sweetener-and intravenous cocaine-a highly addictive and harmful substance-the large majority of animals (94%) preferred the sweet taste of saccharin. The preference for saccharin was not attributable to its unnatural ability to induce sweetness without calories because the same preference was also observed with sucrose, a natural sugar. Finally, the preference for saccharin was not surmountable by increasing doses of cocaine and was observed despite either cocaine intoxication, sensitization or intake escalation-the latter being a hallmark of drug addiction.

Our findings clearly demonstrate that intense sweetness can surpass cocaine reward, even in drug-sensitized and -addicted individuals. We speculate that the addictive potential of intense sweetness results from an inborn hypersensitivity to sweet tastants. In most mammals, including rats and humans, sweet receptors evolved in ancestral environments poor in sugars and are thus not adapted to high concentrations of sweet tastants. The supranormal stimulation of these receptors by sugar-rich diets, such as those now widely available in modern societies, would generate a supranormal reward signal in the brain, with the potential to override self-control mechanisms and thus to lead to addiction. 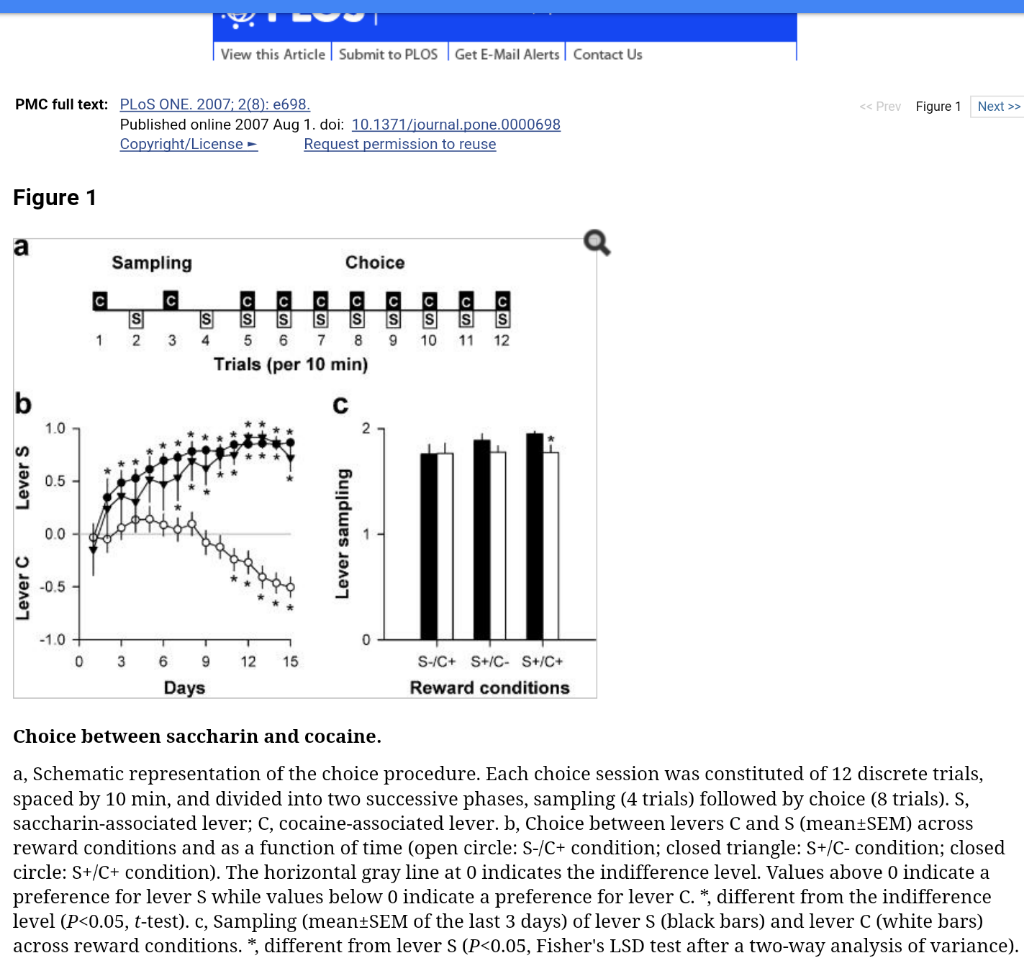 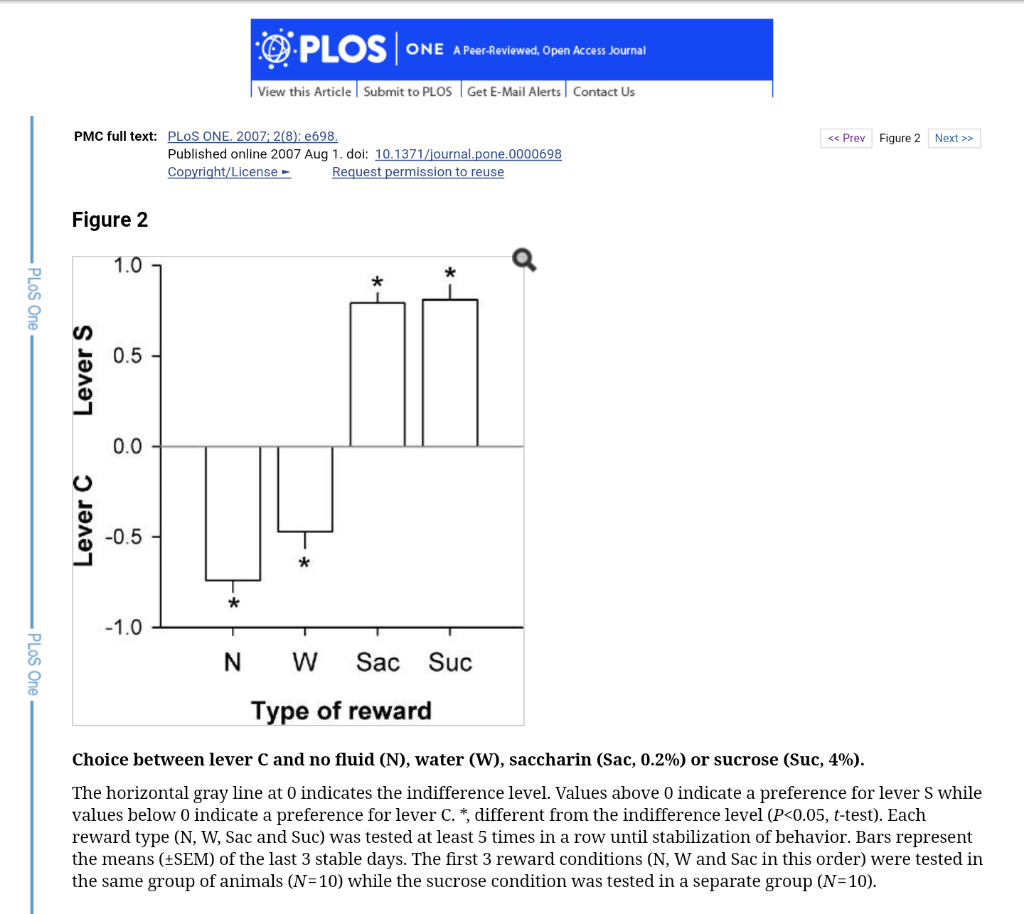 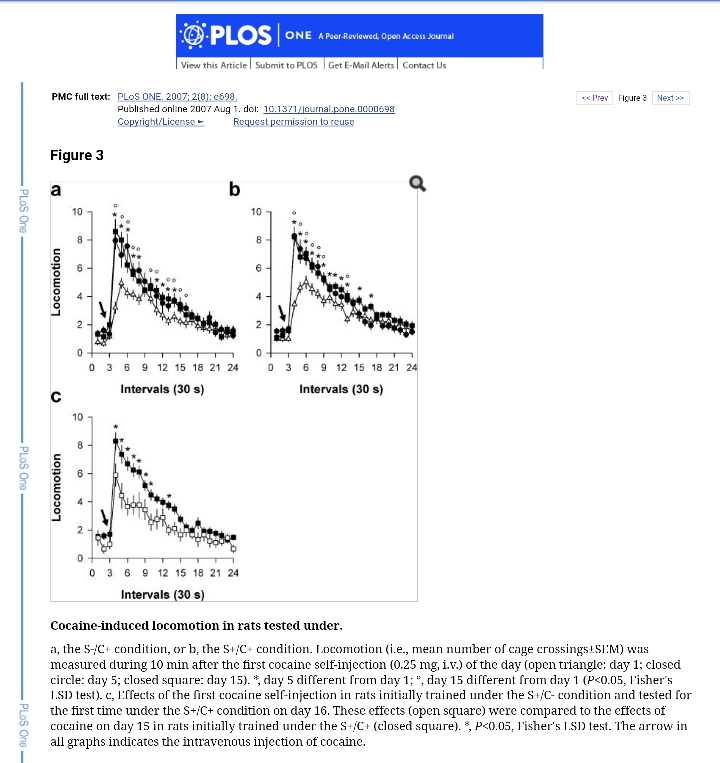 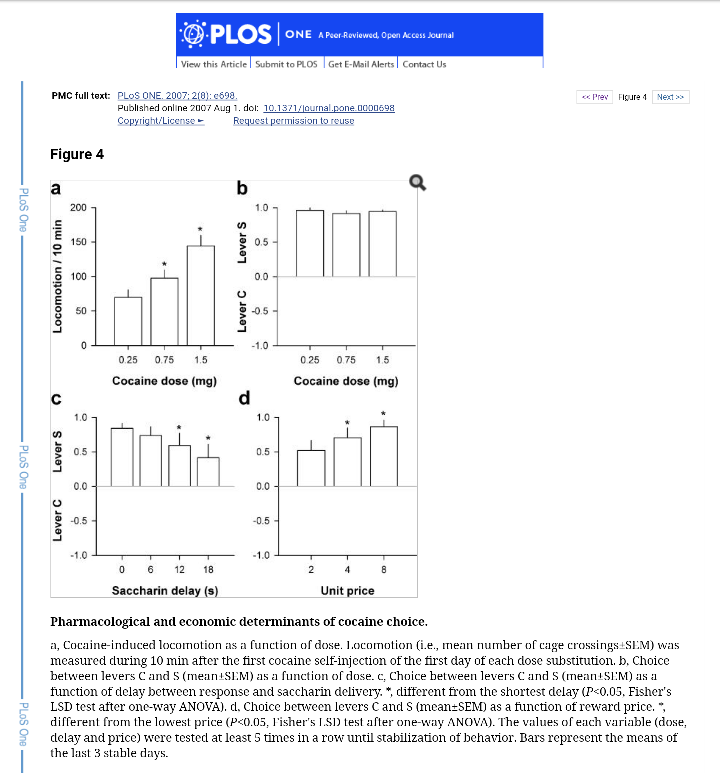 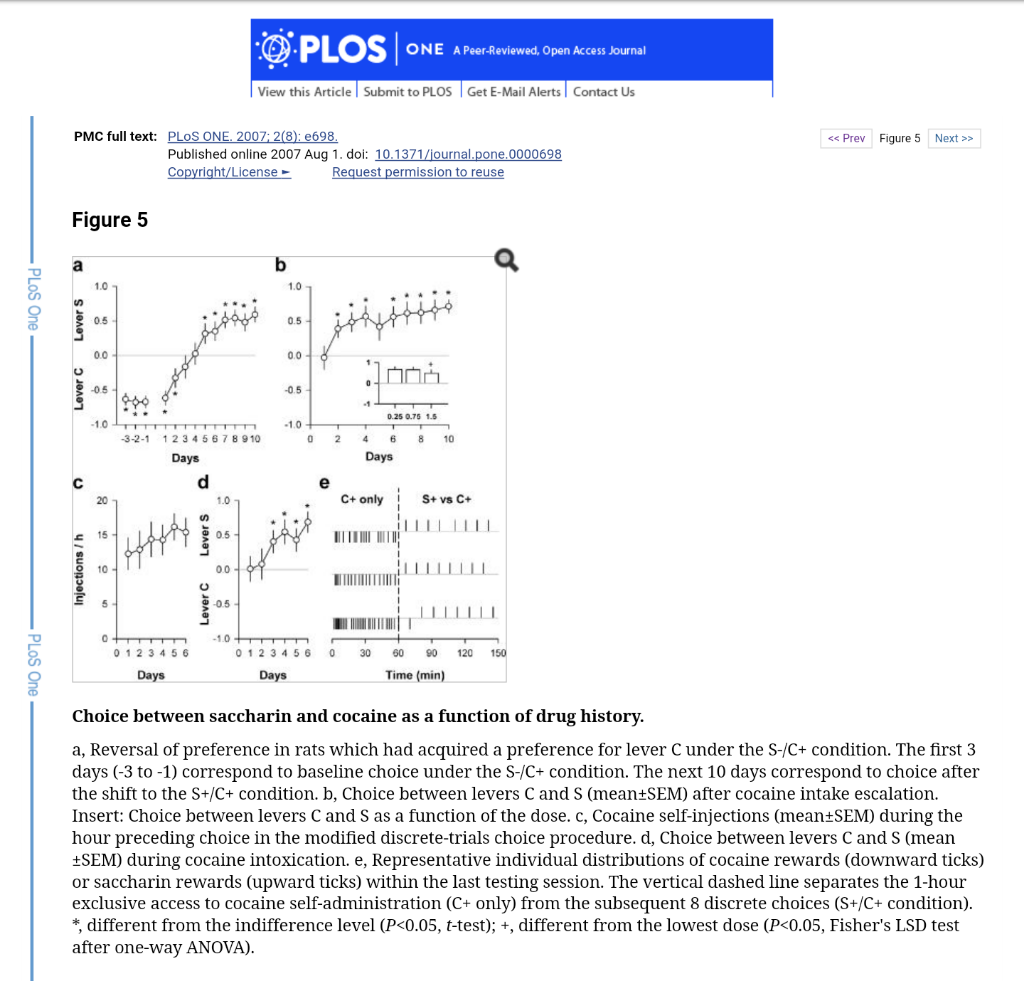 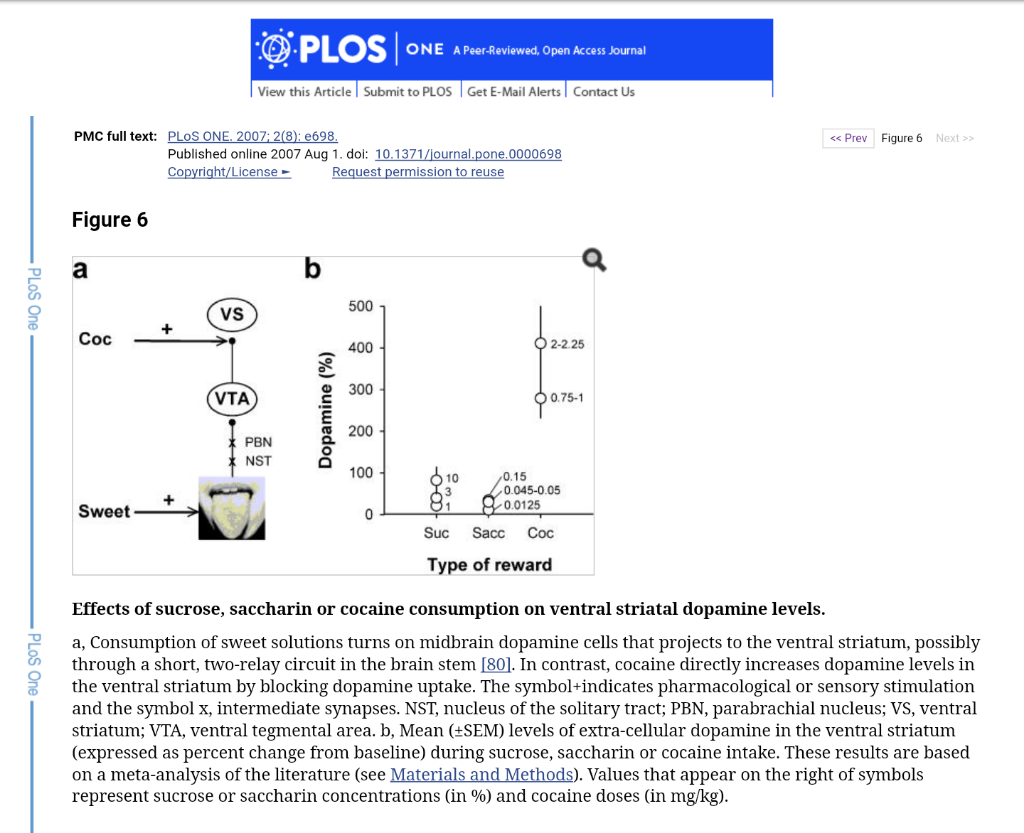 Sugar addiction: pushing the drug-sugar analogy to the limit.

To review research that tests the validity of the analogy between addictive drugs, like cocaine, and hyperpalatable foods, notably those high in added sugar (i.e., sucrose).

Available evidence in humans shows that sugar and sweetness can induce reward and craving that are comparable in magnitude to those induced by addictive drugs. Although this evidence is limited by the inherent difficulty of comparing different types of rewards and psychological experiences in humans, it is nevertheless supported by recent experimental research on sugar and sweet reward in laboratory rats. Overall, this research has revealed that sugar and sweet reward can not only substitute to addictive drugs, like cocaine, but can even be more rewarding and attractive. At the neurobiological level, the neural substrates of sugar and sweet reward appear to be more robust than those of cocaine (i.e., more resistant to functional failures), possibly reflecting past selective evolutionary pressures for seeking and taking foods high in sugar and calories.

The biological robustness in the neural substrates of sugar and sweet reward may be sufficient to explain why many people can have difficultly to control the consumption of foods high in sugar when continuously exposed to them.

For carbs, the usual diet of fighters in our country is either rice or corn. There are many boxing champions here who thrived on boiked corn which gives them more energy according to their claims. But there are some athletes who make sweet potatoes their staple during training for purposes of getting more carbohydrates.
D

Shame on me! I eat sweets like anything and just can't seem to stop eating more. It always gives me a positive feedback.

I have to empty my pantry fast.

This is a very good tip, overall everything that is white cannot be considered healthy because it has been processed and has lost a good portion of their nutritional value.

This is a very good tip, overall everything that is white cannot be considered healthy because it has been processed and has lost a good portion of their nutritional value.
Click to expand...

This is a very good tip, overall everything that is white cannot be considered healthy because it has been processed and has lost a good portion of their nutritional value.
Click to expand...

I mostly stick with high fiber fruits and vegetables as well as starches like rice and potatoes occasionally.
R

Ever since I was a little kid I have loved bagels, and I remember being really upset when I was told that they are not really all that good for you when I was younger. I know now that you just have to be smart about it, but this is still my number one source.

You should eat some healthy foods with carbs- you could try some oats because they may be one of the heathiest whole grain foods on the planet. Raw oats contain 66% carbs, and 11% is fiber, also oats are a relatively good source of protein, a lot more than most grains.

Bagels are less effective than oats, potato and brown rice due to their wheat content spiking blood sugar levels, this leads to extra insulin production which in turn leads to extra body fat, The glycemic index puts wheat type foods near the top, but hey do not worry about this Science stuff, all you need to do is substitute bagels or any wheat type food with oats, rice, potato as you prefer and your body fat will reduce significantly, I promise you, Best of luck friend