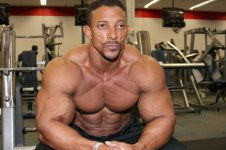 ​
Troy Alves Bodybuilding Biography
Troy Alves is a well known American IFBB professional bodybuilder and trainer. He was born on September 26, 1966 in Phoenix, Arizona USA where he is currently managing his own Pro Nutrition supplement store. He was married to Tara and blessed with a daughter named Devinie. Troy Alves weighs about 220 pounds and he is 5 feet and 8 inches tall.

Troy Alves Background
Initially as a high school and college baseball star, Troy has always had a passion for weight training that dated back during his second year in high school. He was a full scholar in the Arizona Community College for Baseball but was injured while weight training. Troy Alves’ career in baseball was jeopardized seriously triggering him to quit college and join US Airforce. Having his own child that time also triggers him to pursue this move.
After being encouraged to pursue a career in bodybuilding, Troy Alves appeared on his very first show dated back in 1996 during the NPC or National Physique Committee US Championships where he won the 8[SUP]th[/SUP] place. His initial IFBB competition was in Arnold Classic of 2003 where he won the 10[SUP]th[/SUP] place. Troy Alves’ first Mr.Olympia happened in 2003 where he also got the 8[SUP]th[/SUP] place.
Troy Alves is noted for his balanced and symmetrical body. He has been featured in several fitness articles and magazines over the years. He also made his stunning appearance on the cover of FLEX magazine. He is a good childhood friend of Michael Jai White, who is now a known actor. The two have attended the same school together.
Troy Alves competed last February 20, 2010 at the 1[SUP]st[/SUP] Phoenix Pro IFBB Professional Bodybuilding Show held at Mesa Arizona. He won his second IFBB pro first place win in Connecticut last July 30, 2011 for “Europa Battle of Champions”. His third IFBB professional first place win was in Arizona during the “2[SUP]nd[/SUP] Annual Phoenix Pro Bodybuilding Show” last August 2011.
Troy Alves is presently sponsored by Ultimate Sports Nutrition or USN and he is available for guest posing on body building shows and guest appearances on stores by calling or contacting Pro Nutrition Store. Troy Alves is recognized for his appreciation to loyal fans and easy communications regarding questions about health and sport.

Current Shows Participated by Troy Alves
Troy Alves has joined many body building shows and competitions and the most recent lists of shows he participated and won are outlined below:

These are just few of the many shows and competitions that Troy Alves has joined and won. He has indeed made a name and marked a history in the industry of bodybuilding.

More about Troy Alves
Troy Alves admitted that he started his career due to peer pressure. Individuals around him kept saying that he had an excellent physique and that if he improved his legs, he can do great as a body builder. He was 27 when he started and he was definitely a complete beginner back then. At present, he is one of the elite and famous pros in IFBB. His phenomenal engaging and conditioning personality make him deserving for top honors and recognition in every event he competes.
His consistent record of excellent performance combined with his winning and disciplined attitude has made him a surefire bet in earning his place and pro-card in professional contests. Troy Alves credits the love of his life and his best friend Tara for his enormous accomplishments not just in the field of body building but also in life. Troy even stated that once you have someone who loves and supports you a hundred percent and stands by you all the way, you can possibly accomplish anything.
Troy Alve’s wife has been there starting from day one, through ups and downs up to the time where he is currently positioned now. Without the bond and love that they share, Troy Alves said that he would never be who he was and where he is today. Troy Alves also credits her daughter Devinie who has also been patient with him and all his goals. Every time he place well, Troy Alves always owe it to his wife and daughter. This is such an amazing trait of a famous sports icon.
Troy Alves has always been athletic and he spent 10 years of his life as a personal trainer. Aside from being active in sports, he remains a simple guy who enjoys his family life and loves doing things like watching movies and working out.
Troy Alves’ Workout Routine
As a body builder and trainer, Troy Alves has always been concerned about his body and health. He makes sure that enough time is allocated to regular workouts and activities that improve fitness and wellness. He follows a comprehensive and effective workout routine to maintain his body. Due to his excellent physique, many are interested to know about his workout routine especially those aspiring body builders. His sets of exercises are as follows:

Troy Alves also makes sure that during workouts, his body parts such as abs, quads, calves, triceps, shoulders, biceps, chest, glutes, and hamstrings and back are completely trained. His body appeals to all fans that appreciate excellent physique and love watching bodybuilders prowling the stage. Troy Alves’s symmetry is not his only strength. He also owns the most incredible back. He is indeed one of the best in the entire bodybuilding history. His body, determination and desirable traits play big part in his ultimate competitive success.