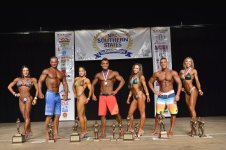 
Men and women ranging in age from senior citizens to young adults and teenagers registered with the National Physique Committee (NPC) will compete in the 2017 NPC Southern States Championships.

The 37th Annual NPC Southern States Fitness will feature exciting competition in Figure, Fitness, Bikini, Physique and Bodybuilding. The contest one of the largest NPC regional national qualifier East of the Mississippi. The NPC is part of the International Federation of Body Builders (IFBB) and sanctions amateurs in the sport in the United States. The two day event of competition will also feature nearly 20 vendors highlighting the latest advancements in supplements, food, clothing and training information at the War Memorial Auditorium in Ft. Lauderdale, FL .


"I'm in awe of how the popularity of this event has grown over the years," says Peter W. Potter, president of USA Sports Promotions and national NPC vice president. "It's become more than a competition. With a vendor showcase that includes fitness clothing, training accessories, supplements, and equipment, it's become a community."


The competition has a local connection with its sponsor Pro Tan®. Founded by Stacy Kaufman, Pro Tan® began as a local Florida business in 1987, but soon became known worldwide as the "Revlon" of bodybuilding, providing competition tanning products for all athletes. Pro Tan® revolutionized bodybuilding competitions by being the first to introduce competitors with an instant "Paint-on" sunless tanning liquid, which we all know as spray tanning nowadays, which Kaufman says "provides the perfect contest bronze needed for competition."


"This event is a perfect fit for us," says Kaufman. "We love the sport of bodybuilding and competitors all need a dark tan to highlight their true definition under the stage lights! Having spent 30 plus years in the industry the timing couldn't be any better for our Pro Tan® brand to give back to our roots as the sport continues to gain popularity with different classes of athletes."


Winner of the 2015 NPC Nationals / IFBB Pro and 2017 IFBB NY Pro, guest poser Sergio Oliva, Jr, son of Sergio "The Myth" Oliva, sees bodybuilding as a continuation of his father's legacy. A member of the Cuban weightlifting team that defected to Miami in 1961, Oliva senior was the first bodybuilder to win the Mr. Olympia competition, and the last man to defeat Arnold Schwarzenegger in competition.


During a special event prior to the competition, guest poser Steve Lister, the 2017 IFBB Wheelchair National Champion – IFBB Pro champion, will be sharing his knowledge at a free seminar July 7 at 1 p.m. at The ZOO Health Club, 1427 E. Commercial Blvd, Oakland Park, Fla. Lister is a physician assistant in cardiovascular medicine and an adaptive athlete who will discuss the essentials of basic health and wellness.


The Head Judge and honored guest at this year's competition is Women's Chairperson IFBB and NPC, Sandy Williamson from Riverside, Calif. One of the largest regional national qualifiers, the NPC Southern States Championship encompasses fitness, figure, bodybuilding, and bikini as well as women's and men's physique categories.


General admission tickets for pre-judging are $25. Show tickets are $30 for reserved seating, and $40 for VIP admission each evening of the competition. Parking is free.


Tickets can be purchased through ticketmaster®, or call the War Memorial box office at 954-828-5380.