Couldn't ask for a better champ!

I'm so happy to see Shawn Rhoden win! His mid section was on point.

Who's the dream killer now?

Congrats to the winners!

The arrogant narrow champ has been finally dethroned, fuck yes!!!

Even if Phil may have a better, 3D back, Shawn overall looks like a MR O.

The full 3 hours and 20 minutes of the stream in HD on youtube!

After watching the replays I have to say:

- Big Ramy brought his best condition to date for the finals. If he looked like that for prejudging he could've beat Phil as well. Top 2 conditioning combined with that insane size. This is the Big Ramy that needs to keep showing for each show from now on.

- Dexter's quads are starting to disappear. He will be lucky to continue to place in the top 5 next year probably.

- Phil will probably always be remembered for having the best arms, details and overall striations and conditioning on that stage, but goddamn that bloated midsection and narrow chest. Unfortunately he won't be able to bring that 2011 shape. The waist lines changed a lot since then.

- Sergio Oliva Jr, as I said before did not deserved to be on that stage. He needs a lot of improvements, to be in the top 6 in the future. He has the tools, but he needs the mentality for being in the top.

I was really thinking it would be between Big Ramy and Phil Heath. Hard to believe Ramy wasn't more prepared.
Last edited: Sep 16, 2018

Well first off I will congratulate the new champ @flexatronrhoden on a job well done. Not going to complain nor disrespect anyone because that’s Sucka shit and I’m better than that. A measurement of a man isn’t when he’s on top but when he gets knocked down and is challenged to get his ass up or lay down. Well, I won’t lay down, but I’m going to take some time, reflect on the journey and plan my next move. I wanna thank you all and I mean all of you even the ones who wished for my downfall because deep down we all in this together. I witnessed @ronniecoleman8 lose to @jaycutler then @mrolympia08 dethrone @jaycutler and then Jay coming out like a fuckin animal an reclaiming his title. Then of course the night I defeated, now wait, I won my first Olympia title and boy was that a wild ride filled with emotions that only a person who has won could fathom. Being on top for 7 straight years is a long damn time so imma relish in that, spend time with my own thoughts and continue to give all Honor to God because He has definitely provided me an incredible life that many of you have been apart of. Thank you thank you thank you everyone in attendance and those watching around the world. We saw history be made and I for one got a chance to be apart of life! Man I can’t lie this sucks but there’s always tomorrow. Love you ALL and I fckin mean that Yo everyone even the ones who opposed me because they simply just wanted something different. Be safe everyone. PHIL Heath Out! 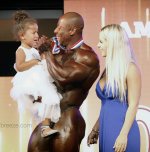 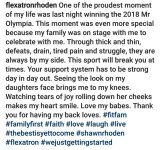 Good show. I'm glad to see Roelly placed better this year. I would like to see him take 1st next year. Shawn put on a great performance! Far better than last year.
Similar threads