Not many guys can make ronnie's arm look small...until.. 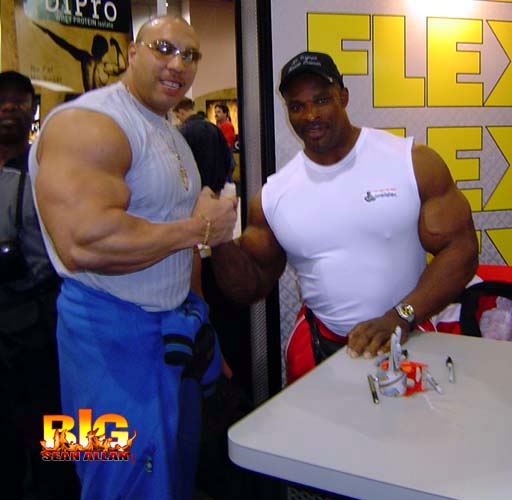 Yea i've seen him i donno why hes not better? got huge stats, likly can't nail it...

From his own mouth ..measures are:

Here's what Sean recently posted on MD, with a couple of pics 1 week out from his qualifying show:

Hello guys..I usually dont post on boards etc because thats what got me in trouble in the past..I just wanna say Thank You guys for the support,Its greatly Appreciated...Alot has changed in my life since I 1st stepped on the bodybuilding scene...In the beggining of my career I admit I made alot of Immature,Cocky,ARROGANT mistakes an have learned greatly from them...I have put my Past behind me an have Matured greatly an moved on into biggerr an better things in my life...I havent competed or been in the public eye since 2006 when I made or POOR DECISION to Accept a Invite to compete in the PDI...Every Athlete on here goal is to compete as a PRO...Wayne Demilla reached out to me an gave me a oppurtunity to finally say I am a PRO an compete at his NIGHT OF CHAMPIONS SHOW IN 2006..I took the invite after several tries an attempt at turning PRO but Realized that nothing in life comes easy an that if I was to ever turn PRO,I would rather Earn it...I spoke with JIM MANION an Steve Weinberger after that show who I am both Friends with an I took responsability for competing in a rival organization an was Suspended for a 1 yr....I did not take go to any of the big shows or local shows an just concentrated on Improving my mind,body n soul...After 2 yrs of being away I am HAPPY TO ANNOUNCE THAT I WILL BE BACK IN THE NPC in 2008...I will start my career fresh at the bottom from the local scene an Requalify for Nationals an give a all out effort of EARNING MY PRO CARD at 2 of the PRO QUALIFIERS this yr...At 35yrs of age an 3 kids I no longer will talk the talk but will remain positive an let my body Do the talking...I just recently signed with ABB/ONN an will be competing next Saturday in NEW YORK at the Atlantic States to Requalify..I wanna wish everyone the BEST OF LUCK WITH THERE GOALS N DREAMS...I realize nothing in life comes easy but if you put your mind to it,You can conquer ANYTHING..ACTION SPEAKS LOUDER THEN WORDS...GOOD LUCK TO ATHLETES COMPETING at JR'S ETC...STAY FOCUSED AN REMEMBER,ONLY THE STRONG SURVIVE...GOD-BLESS.
BIG SEAN ALLAN

Remember seeing that pic a while back. Big boy.

he should be pro soon...looks great in those contest preps

Isn't he also one of those complainers? The ones that always say he should have won a show and yet he didn't even place in the top 15?

I also think he went with Demillas new org. Will he be allowed to compete in IFBB?

So many questions... but a big boy for sure

Yes, he did compete in the PDI, and admits it was a mistake.

he does look like him LOL, that guy is huge

he is big but the only reason he looks soo much bigger is because of the camera lens, he said it himself.

kinda like some of will harris old pics. if you wanna know why sean doesnt place high even in the pdi, look at his contest pics, a small waist doesnt necessarily mean good lines
B

That's bull I've seen these two standing next to each other, and the sizes are right

his arms appear bigger than ronnie's, but ronnie's just have that sick hang to them that can't be matched. this guy would do well if he was able to nail his conditioning.

Batmanx007 said:
That's bull I've seen these two standing next to each other, and the sizes are right
Click to expand...

i have seen sean allen, he is big as hell but im telling you that picture is not up to proportions of reality, i have a picture of me flexing my tricep next to jay cutler and my tris look almost as big as his but i know that its not so in reality, look at his few days out pics and compare them to how ronnie looks in 03 or 04 and there is no comparison.