THE UNSEEN PICTURE OF YATES 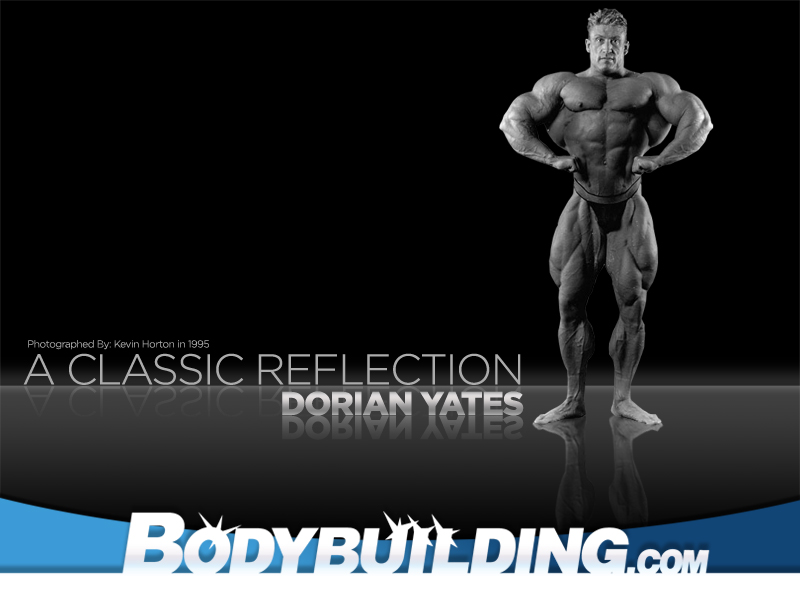 GMV Productions of Australia has added around two and a half hours of new material to the original single disc Blood & Guts DVD to present in a new 2 DVD set. Learn all about it right here!

The Story On The New Ultimate Version Of Blood & Guts! 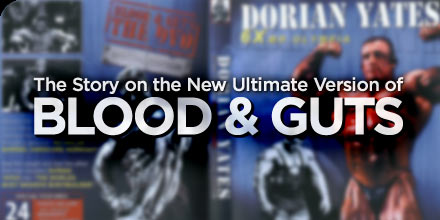 
GMV Productions of Australia has added around two and a half hours of new material to the original single disc Blood & Guts DVD to present in a new 2 DVD set. This includes every second of additional or previously unseen footage that GMV could find featuring the fabulous career of 6 time Mr. Olympia, Dorian Yates.

Much of this additional material was shot by GMV throughout Dorian's career, and includes our last interview with him in 2002 at the Olympia Expo. Some years ago Dorian approached Wayne Gallasch at GMV Productions to turn his best selling video Blood & Guts into a DVD.

This new edition is updated with some rare footage of Dorian winning Grand Prix and numerous photos of Dorian, many of which have never been seen before.

We did this, adding a small photo gallery at the same time and designing a modern, new cover that still reflected the brutal physique of Dorian.

Earlier this year when Wayne was taping an event in UK, he bumped into Lee Dickens, one of Dorian's old friends. Lee suggested that GMV should expand Dorian's original Blood & Guts (shot by Kevin Horton) by adding all GMV's own footage of Dorian - shot throughout his career, including his latest interviews since he retired.

Naturally we agreed that this was a great idea, and rather than just adding in some extra scenes, we decided to expand the original single disc release into a brand new 2 DVD set. This we subsequently called Blood & Guts - The Ultimate Edition 2 DVD Set.

As we commenced the thorough search of our tape archives for all Dorian material, the project suddenly took on a major life of its own! From early amateur footage in England to many of Dorian's Grand Prix victories, to interviews and much more. Part of the surprise extra material came from Mark Dugdale. 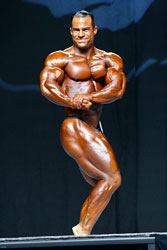 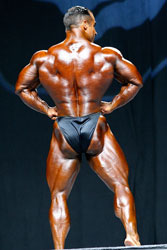 
Wayne knew that Mark and his producer Joel Barham had been shooting video at Dorian's Gym about one year earlier and felt sure there must be some unused gems left on the cutting room floor!

Subsequently, Mark sent us 25 minutes of wonderful, interesting and funny outtakes from their shooting with Dorian at his famous Temple Gym in Birmingham. This footage was shot whilst filming Mark's outstanding DVD "A Week in the Dungeon".


We then received a suggestion to see if we could include Dorian's 7 Mr. Olympia posing routines from 1991 to 1997, the last 6 years being his winning routines. Thanks to the kindness and generosity of Andy Olson of Magna Media International, this permission was granted.

After we scoured our video archive for this new material, we then went back through our photo archives from all the contests that we or our photographers had covered during Dorian's career. This turned up a number of fabulous, previously unseen photos which have been added to the huge new photo gallery.

This 2 disc DVD contains around two and a half hours of new material to present all of the lifetime footage featuring the fabulous career of 6 time Mr. Olympia, Dorian Yates.


The gallery now contains around 150 photos covering every aspect of Dorian's career from training in the gym to the guest posing and contest stage to private and informal shots.

Our thanks to Dorian, Lee Dickens, Alex McKenna and all who have contributed photos. We hope that Dorian's many fans will enjoy what is now the 2 DVD set "Ultimate Edition" of the ultimate video record of the career of the "Ultimate Mr. Olympia - Dorian Yates".

* The original 64 minutes of the Blood & Guts DVD. Witness the intensity and determination as we follow the near 300lb multi Mr. Olympia winner Dorian Yates through a genuine 'no holds barred' hardcore workout. See the weights used and feel the supreme effort that has moulded Dorian Yates into the world's most massive bodybuilder of his time.

* 25 minutes of Mark Dugdale outtakes where you see informal footage of Dorian at the gym, hear him coaching Mark, hear his comments on others in the industry and see Dorian coaching the massive Zack Khan (a top British amateur on the brink of qualifying for his Pro Card). You'll also see Kevin Horton, who shot the original gym workout, explaining why most of it was presented in B&W. Plus much more. 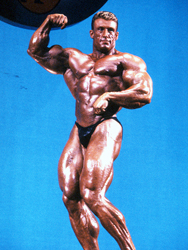 * Approximately 150 photos in the photo gallery, many of which have never been seen before.

This all new second Blood & Guts disc is packed with the posing highlights of Dorian's career, plus several interviews. Apart from the Olympia highlights, the other footage was primarily shot by GMV's Wayne Gallasch and is from his personal archive.

FIBO footage is in conjunction with Willy Zdenek of Sport Video Hits, Germany. Contents of this disc are as follows:

thanks for the updates demostenes

Agreed, front lat spread must be one of his best pics

That is basically one of the sickest things I've ever seen...thanks, Demostenes!
D

thanks for the good comments, guys santasmile
M