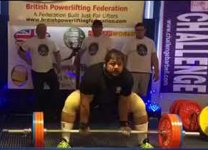 After winning two gold medals at the European Championship, powerlifter Gaurav Sharma has now set his sights on the Mr Olympia 2018 to be held in Las Vegas in September.


"It always feels great top win medal for the nation. For any athlete it is an honour to represent India and when the tri colour go high, you can't express that feeling," Gaurav told IANS.

Gaurav, who is also a 'mahant' (priest) in a temple in Chandani Chowk, has been training under Dronacharya awardee coach Bhupinder Dhawan for the past several years.

"Since my childhood, I always wanted to be a weightlifter. I used to go for training near my house. I was even selected for the sub-junior Delhi team. But after I met with an accident, I had to quit the sport. However, I later joined powerlifting thanks to Bhupinder sir, who believed in me and made me a world champion in powerlifting," he added.

"It realy hurts when I read that our athltese failed dope test in some events. They should stick to natural diets and avoid such power ehance substances," he said.