Kiara Alfonseca gave us permission to post this. I was wondering what you all thought about bringing back the Ms. International bodybuilding competition and the lack of women in the Arnold Classic these days.


One of the world's biggest bodybuilding events features 18,000 athletes from around the world competing in 75 different events — but women's bodybuilding is not on the roster at the 2018 Arnold Sports Festival.


Beth Mandyck, a title-winning bodybuilder, is hoping to change that and give women a chance on the world-renowned bodybuilding stage.


“It was very disappointing,” said Mandyck, who filed a gender discrimination complaint with the city of Columbus, Ohio, on Jan. 5. The city investigates and addresses claims of discrimination, and since the festival is held every year in the Greater Columbus Convention Center, she hoped officials would solve her problem without a fuss before the event begins on March 1. 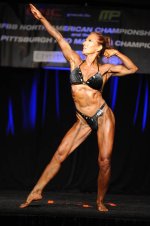 Mandyck, 56, has performed exclusively in bodybuilding shows since she began her athletic career about three years ago. She says intense workouts with her trainer, Jean-Claude Desardouin, and a tight training schedule made her the competitor she is, winning titles in three different National Physique Committee shows.


When it came to the highly regarded Arnold Sports Festival, co-founded by Arnold Schwarzenegger, Mandyck was disappointed to find a bodybuilding competition for men, but not for women.


The 2013 Arnold Sports Festival hosted 11 women in the final Ms. International bodybuilding competition, compared to the 18 in the figure competition, 16 in bikini and 10 in fitness that year.


“The International Federation of Bodybuilding (IFBB) discontinued the women's bodybuilding event in their program, so we felt that it was best to back away from that event,” said Lorimer. “Women were getting so muscular and so into the development of their muscles that it was not at all aspirational for other women. The IFBB backed away but replaced it with other events.”


Competitors in Fitness International line up as part of the Arnold Sports Festival on March 3, 2017, in Columbus, Ohio. Frank Jansky / Icon Sportswire via AP file
Lorimer prides the festival on offering a multitude of events for women around strength, fitness, and athleticism.


Mandyck says she’s been told by other Arnold Sports Festival promoters that she could still choose to perform in other categories, like figure or physique, which they said are similar enough to the bodybuilding competition for her to make the transition.


According to the World Natural Bodybuilding Federation, bodybuilding is judged on mass, definition and proportion, while physique is judges on muscular aesthetics.


When the complaint landed on the desk of the Columbus mayor’s Deputy Chief of Staff Kenneth Paul, he wrote in a response to Mandyck that the event organizers would allow her to compete in the Physique Championships without high heels because they are not required. The Office of the Mayor did not immediately respond for comment.


Mandyck says it’s more than an issue about heels and poses.


“The thing about bodybuilding is to be able to feel strong and it’s about flexing and my fist is closed,” said Mandyck. “[Physique is] a fine category, but they’re trying to say it’s comparable.”


Mandyck attempted to send in her application for men’s bodybuilding, but was rejected. Now, she's asking Bob Lorimer, son of Jim Lorimer and president of the Arnold Sports Festival, to compromise on alternative ways to get female bodybuilders on the stage.


Though Mandyck won't be able to participate in the this year's competition, she's hoping her Change.org petition can change how promoters view her sport. Her complaint has been backed by 10-time Ms. Olympia Iris Kyleand by former Olympic gold medalist Nancy Hogshead-Makar, the CEO of Champion Women, an advocacy group for women in sports, as well as by the Women's Sports Foundation.


“We’re supportive of her efforts to participate in the bodybuilding competition,” said Hogshead-Makar.