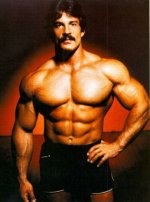 Mike Mentzer is known for his high intensity training approach, HEAVY DUTY. World would have seen many bodybuilders who excelled in their niche. But there are rare examples where a bodybuilder wholeheartedly shared his knowledge, experience and philosophy of bodybuilding. The wholesome perspective of Mike Mentzer has been exemplified in his contributions and works. For some considered him a path breaker others highly acknowledged his philosophy.
The heavy duty man was a person of morals and reasons. The courage and audacity to beat the hardships and a positive aspect in life kept him high and pioneering in the field of bodybuilding as well as science of life. His books, articles and audio tapes are thoroughly scientific with a philosophical touch. Bodybuilding was more than just passion for him, it was his profession, business, philosophy and writing.
Mike Mentzer was born on 16, November, 1951. He worked for US Air Force in 12 hour shift and still managed to workout. This smart bodybuilder knew how to grow muscle in just small period of time. While many of his contemporaries worked hour’s together 5 to 6 days a week, he hardly worked for 3 days per week.

Mike’s bodybuilding career:
Mike started with his body-building career at the age of 18. Though not a good start, he contested first in 1969 and participated in 1971 AAU Mr. America. Though he did not win the title, he found a leap with a contact of Arthur Jones, Trainer. He came back with great practice and preparation in 1975 Mr. America contest when he was positioned at 3'rd place after Robby Robinson and Roger Callard. On his third attempt in 1976, he won the most coveted AAA Mr. America title with first position in medium weight class. The next year he won the North America Championships, Vancouver and stood second at 1977 Mr. Universe contest in Nimes, France behind Kal Szkalak. However in the year 1978, he won the title Mr. Universe held at Acapulco, Mexico with a good score of 300. In the World Amateur Championships he won the first place in heavyweight class.
He stood first in IFBB Florida Pro invitational and southern Pro Cup IFBB, and second in IFBB Canada Pro Cup and Pittsburgh Pro Invitational IFBB, and third in IFBB Night of Champions.
In 1979 Mr. Olympia, he excelled with his high class performance in heavyweight class but lost the title to Frank Zane. In his second try at Mr. Olympia, he stood fourth with Boyer Coe. With a great dissatisfaction he quit competitive body-building at young age of 29 years.


Mike’s Bodybuilding Philosophy:
He used science and understood the perfect recipe for muscle training with little resources and time. He knew hormones play a major role in building muscles and high stress due to regular workout actually reduces the pace of body-building. Exercises and the extent of reps and intensity determined the process of body-building. He said our body wanted the right blend of exercise and recovery phase with cycles of beginnings to failures. You do not have to work hard, expose your ligaments to wear and tear due to strenuous exercises without sufficient breaks.
High intensity training the Mike Mentzer Way: Val Segal, friend and colleague of Mike Mentzer is a person whom Mike corresponded with to develop this video. Unfortunately, soon after this assignment, Mike Mentzer rested peacefully in sleep.
Mike helped the beginners understand the concept of high intensity weight training with this video. He said regular but infrequent, short but intense workouts are the secret to attain good results in no time without using drugs or steroids. Mentzer has been noticed for trying to perfecting what he learned from his trainer Arthur Jones.
His ideology of bodybuilding was meeting philosophy through or at the end and he felt the body is integrated to the mind. Bodybuilding is incomplete without perfect reasoning. Same goes with the life, reasoning is the secret of happiness and contentment. All in all, he was a man of pursuits who liked to delve in something beyond body-building, this was very much evident with the discourses presented in his books.

Heavy duty training system:
With his encounter with Casey Viator, the actual muscle training started at a competitive threshold. He learnt about high intensity training that Viator did regularly that used to be brief and infrequent. Viator introduced Mike to Arthur Jones, creator of Nautilus machines. Mike dig deeper into the high intensity training with the ideas of Jones who opened up the high intensity workouts for the people in 1960s.
The mantra was disciplined postures and slow steady movements of weights until total failure of muscles. Mike liked to experiment and soon understood that Jones had not yet adopted the principles of intense training. It was time that Mike completely understood the concept which demanded through investigation. He started to experiment the effect of variable factors such as exercises, number of repetitions, recovery period to achieve the optimum training formula.
He worked on a schedule that involved exercises 7 to 9 sets just 3 days per week. This was the Mentzer’s Heavy Duty program that allowed him to be fit and strong with the commencement of modern bodybuilding. Heavy Duty program is also called as “minimal training” as it involved limited workout routine interspersed in greater rest period. The importance given to resting period was enormous. Muscle outgrowth is a result of extent of stress experienced by the muscle rather than the time involved. Short term stress is healthy as it reduces the physical stress and resistance developed due to stress. Therefore, to improve the resistance and endurance of muscles, they should be strained with intense workouts to the limit of positive failure. According to Mike, this usually involves less than five sets of exercise with 5 to 7 days resting period.

Paul Becker in his article has mentioned his experience as a trainee under Mike Mentzer. In his first encounter with Mike, Mike seemed to have been suffering from back problems that did not allow him to be in perfect shape. However, it didn’t stop him from training his peers. The leg workout was what Mike taught Paul at first. The form used in the exercises was quite slow and intense. A very slow motion of 4 second ups and 4 seconds downs continued. When there were chances of resistance due to contraction, there was 2 seconds extension. This 2 second hold was very hard to follow, but the results were very effective and safe. The leg workout continued without any rest that involved heavy leg extensions and leg presses up till failure. The total motivation and confidence Mike instilled in his trainees is highly effective as they would do their best to postpone the failure. This way the workouts are severely slow and intense.

Books from Mike Mentzer:
High intensity training the Mike Mentzer way was published on December, 13, 2002 that was co-authored by John Little.
The Mentzer Method to Fitness: A Revolutionary Weight-Training System for Men and Women was published in April 1980.
Mike Mentzer’s Complete Book of Weight Training in the year 1982.
Mike Mentzer’s Spot Body Building co-authored with Ardy in the year 1983.
Mentzer also wrote for magazine- Iron Man. By 1980s he had lost professional touch in body-building industry, he made a comeback and made an impression in the 1990s. Mike and his Heavy Duty principles were responsible for Dorian Yates’s success in Mr. Olympia.
Mike Mentzer used his hands on body-building and capitalized his talent in bodybuilding apparel. He started a clothing company- MYM- Mentzer Yates Duty also called as Heavy Duty Inc in the year 1994.

Mike’s Demise:
On the very unfortunate day of June 10, 2001 Mentzer was found dead by his brother Ray Mentzer. Mentzer is said to have dead in sleep due to cardiovascular complications. On the second day, Ray Mentzer also succumbed to death due to chronic disease- Berger’s disease.
Mike Mentzer was a man who exuded bodybuilding with style and passion. He excelled as a bodybuilder, writer and a businessman. He was a great thinker who took body-building philosophically. He used the technique he learned from his trainer and learned further beyond with his deep passion to find a breakthrough. Mr. Universe and Mr. America had something more than bodybuilder inside him.


Copyright 2013 MuscleMecca.com
Not to be used without permission 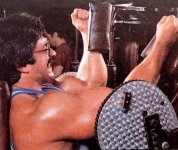 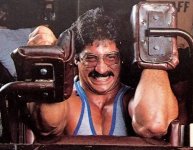 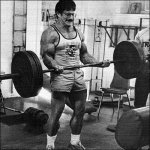