Another very sad event took place. Joanna Thomas has passed away at the very young age of 43.


Condolences to her family, friends and family. 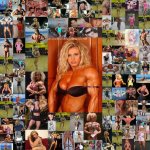 I don't know what killed her but she had some issues due to having osteoarthritis. RIP.

At the of 43 is still young to lose such a talented athlete. I feel sad seeing a lady who gives a lot to the community to just up and die.

What actually was the cause of her death? Was it a natural death or drugs related?
H

Heatman said:
At the of 43 is still young to lose such a talented athlete. I feel sad seeing a lady who gives a lot to the community to just up and die.

What actually was the cause of her death? Was it a natural death or drugs related?
Click to expand...

It wasn't drug related but health complications. Felt bad losing her to death, as a fan, at such a young age!

Several days ago IFBB Pro Joanna Thomas had passed away. Joanna was one of my dearest friends and she was such an amazing person.

Several days ago IFBB Pro Joanna Thomas had passed away for those who knew Joanna she was truly a remarkable human being. This article is not about how Joanna died it is how she lived and at one point in her life conquered the impossible.

IFBB Pro Joanna Thomas was the youngest female to get her pro card however she is more known for the documentary "Supersize She" Directed By Mira King https://www.imdb.com/title/tt0827207/ which highlighted her life and the sport she lived for bodybuilding.

I saw this documentary when I was in high school and it was so amazing to learn about this remarkable woman who came from a small town Cornwall in England and take the among herself to defy all odds. I would later follow her body building career and both her and her sister Nicola were remarkable athletes.

Before I had met Joanna she had inspired me to athletics and I had pushed myself to compete on a NCAA level and later compete in Power lifting and a few strongman shows. When I had gotten my world record a few years ago she had discovered me and was one of the first to congratulate me. We became quick friends and there were moments in my life when I was not doing very well. She would take the time and call me and we would talk for hours she always cheered me up. I was in hospital for three weeks. When she found out she was one of the few who didn't judge me and ask how I was. She was my hero, and my friend and I truly treasure her.