The Reign of Ronnie Coleman, The Super King of Bodybuilding 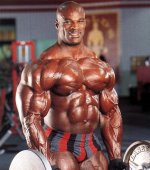 Welcome to the world of Ronnie Coleman.

Perhaps it is not no news that Ronnie Coleman joined the Arlington Police Department as an officer, and that he still works as a reserve officer for the department, but listen up: Ronnie had to frantically search for a source of living after college and went with a friend to Texas all the way from Louisiana in search of work. Back then, the police officer job was the one pretty available, so he took it on.

Coleman even went further to take on two more jobs; delivering pizzas and working as security staff to put enough food on the table. He would later re-collect those times this way, “I ain’t ever be afraid of hard work back then”.

However, Coleman had an early preference for keeping fit and staying in shape. Once an active footballer, and then as a police officer, he slowly made his entry into the bodybuilding vocation. Through a free membership granted him by Brian Robson, owner of Metro Flex Gym in Arlington, Coleman began training and due to the intense hard work he displayed at the gym, was advised by his coach to compete in an amateur bodybuilding contest.

Coleman prepared as he knew how, went for the kill and grabbed his first heavyweight and overall gold prizes at the 1990 edition of Mr. Texas and consequently moving on to the Pro status at the NPC Nationals 1991 World Amateur Championships.

Not one to take the base of the ladder for a place, he had his last amateur days in 1991 at the second and final bid at the NPC Nationals placing fourth behind Overall Champion Kevin Levrone, Flex Wheeler and the late Paul DeMayo. Coleman got a chance to vie for an International Pro card against the best amateurs across other lands at the IFBB World Amateur Championship (formerly Mr. Universe) in Poland, knocked out the best heavyweights and got what he set out for - the pro card. Coming across this man back then, somehow you could almost not knock away the feeling that he will one day emerge the World’s Number One Bodybuilder. The road to that however was tough for Ronnie.

The year 1992 posed a greater series of challenges for Coleman as he made his pro debut at the May 9 Chicago Pro, placing a distant 11th. Incidentally, all ten men who dusted him are currently retired from the game. In descending order ,they were Porter Cottrele, Thierry Pastel, Kevin Levrone (still competes at the Toronto show), Milors Sarcew, Kevin McGaunn, Mauro Sanrni, Ray McNeil (late), Flario Bachiannini, and Bob Paris.

Weeks later, New York welcomed Ronnie at the Night of Champions and it was the fourteenth position that time. The contest also marked the start of Kevin Levrone’s series of 20 Pro wins, Robby Robinson, Geir Borgan Paulsen (from Norway), Dan Smith, and Alan Ichinose.

Back then, heavyweight winners at the IFBB World Amateur Championships got a free ticket to compete at Mr. Olympia if they so wanted and Ronnie grabbed the chance. Held in Helsinki, Finland, the competition witnessed the start of Dorian Yate’s six year hold on the Mr. Olympia title; the competition was so competitive that seven men ‘tied’ for the sixteenth place, which implies that the organizers didn’t bother to sort out anyone after the first fifteen. Ronnie was in this group. Though Ronnie took last place in his first ever Mr. O weighing around 220 pounds, perhaps you should get a breakdown of those that handed Coleman his ass; super builders such as Lee ; Labrada, Shawn Ray, Mohammed Benaziz (now late),Vince Taylor and Sonny Schmidt (late).

Yea, Ronnie competed against the super best and these just served as enough inspiration for him to stake up his game and distinguish himself as the last builder out of the 90’s generation of the world’s top body builders.

1993 wasn’t any that fulfilling for Coleman as he entered for shows but never qualified for the Olympia. His best was a fourth at one of the two Grand Prix events in France.

The following year saw Coleman entering in for 3 contests in the spring, but the signs of the front-runner went down after he got exhausted at the Mr. Olympia.

Ronnie went into 1998 with a loss to Kevin Levrone in Sane Jose, but trashed Kevin at the Night of Champions later that spring thus opening up another Mr. Olympia for 34-year old Coleman in New York. Before fans numbering well over 5,000 fans, Ronnie never got much of the press attention before the event since he his ‘localized’ to minor cities and local gyms. This never counted when he dusted the current holder Yate Dorian with a tight margin to win his first ever Mr. Olympia. Coleman would later write to describe this as “the greatest day of my life and career”. The more he won, the better he got. Or how do you explain smashing a record reputed to have only being won by a single man in history and capture the Mr. Olympia for record 8 times?

Ronnie produced and narrated different bodybuilding videos that one can buy. "The Unbelievable" chronicles his daily activities while preparing for the 2000 edition of Mr. Olympia. "The Cost of Redemption" captures him bench pressing almost 500 pounds of raw weight, and "On The Road" gives almost a100 minutes breakdown of what Coleman`s typical workouts look like.

Ronnie currently stands at 5'11" but his weight varies from off-season to competitions. During the off-season, his weight gets as high as 350 pounds and could drop to a 275-pound weight during competitions. His most outstanding feature is his legs, which measure 37 inches around. Other notable features are his 24 inch arms and 60 inch chest.

Coleman has been drumming support for the Inner City Games, which was co-founded by Arnold Schwarzenegger in 1991. Ronnie was also the recipient of the 2001 Admiral in the Texas Navy Certificate Award from Texas Governor Rick Perry for outstanding performances in bodybuilding and in the promotion of physical fitness.

Ronnie Coleman is truly an epitome to the sport and game of bodybuilding and arguably, ranks just behind Arnold as the greatest bodybuilder of all time.