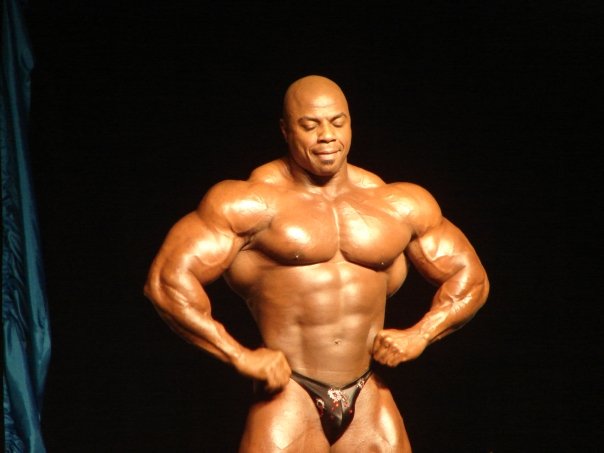 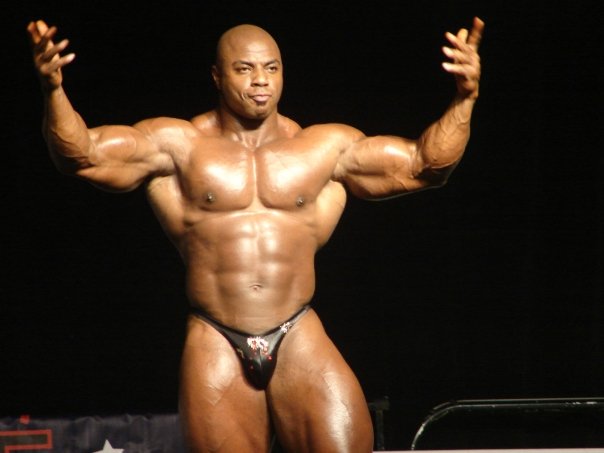 Toney Freeman Bodybuilding Bio From wiki:
Freeman's nickname is The X-Man because his body characterizes the "X-frame" of classical bodybuilding: broad shoulders, narrow waist, and flaring thighs. He has been featured on the cover and pages of Flex, Muscular Development, and Musclemag. Freeman did not become a competitive bodybuilder until his late 30s because, for many years, it was a hobby and the sport was dominated by his idols Lee Haney and Dorian Yates.

On December 8, 2010, during a visit to Sweden, Freeman was escorted by the police from Sundsvall while undertaking a promotional appearance in a local store. The police knew Freeman and other international bodybuilders were coming to Sweden for a fitness festival from promotional posters. According to Freeman, he was taken to the police station and was denied a legal representative and forced to give a urine sample.[3] Reports allege that Freeman tested positive for testosterone, human growth hormone, and cannabis.[4][5][6][7][8][9] He was released the same day with no charge. On December 31, 2010, Freeman responded to the allegations with an official statement and a video in which he emphasized he had not been treated properly by being denied an advocate or communication with the U.S. embassy.

Freeman became the first[citation needed] international professional bodybuilder to be detained by the Swedish police under "muscle profiling",[12] a profiling method used by Swedish police in which suspicion of performance-enhancing drug use is based solely on physical appearance.[13] The possession of such substances as steroids is illegal in Sweden. According to others who have been detained in this manner, police use the size and appearance of the bodybuilder to detain them, then aim to prove their case with blood or urine samples taken at the station.[14] Police staff member Henrik Blusi generalized the actions taken against Freeman to all professional bodybuilders, saying: "If you are a professional bodybuilder you should not come to Sundsvall. We are very well informed here. We are currently conducting the largest doping trial in Europe, and then one should understand that we have an eye out for these things now."
Last edited by a moderator: Apr 21, 2021

wow, he's big, but nothing that impressive...

looks big as usual....i'm just really hoping he nails his conditioning this Olympia i'm a big fan of Toney

Hard to judge by these pic's but hopefully he can get ripped to achieve something at the O.

The big disappointment of 2007. Hope he can come in better this year

He looks like he has nothing new to show in the O... looking big and good, though.

looks good and big as usual, but nothing special.

i think thats about the shape he came in at last years olympia. i really hope toney brings it to the O this year, i would love to see him top 6, he has a physique the judges will reward given the chance.

he needs to do some damage this year as kai and victor will most likley be at the O in 2009 and toneys time as a top runner at the olympia may be over. he needs to gain momentum coming into the 2009 season

that pec tear is gonna hur thim... it really takes away from the impressiveness of his chest

He really needs to nail conditioning to be impressive. I'm a big fan of he and Wolf's physiques .

Being one of the few tall guys out there, I'm a fan of him, however I think he is past his best. His last few showings have all been disapointing. Lets hope he can get back to the old Freeman of a few years ago.

He doesn't look big,HE IS BIG!!