You cannot go wrong by listening to Arnold Schwarzenegger when it comes to bodybuilding workouts. 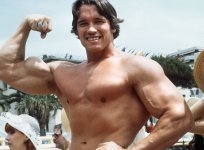 Born in Thal, Austria, Arnold Schwarzenegger was born on the 30th of July 1947 to parents Gustav and Aurelia Schwarzenegger. Growing up in a highly Roman Catholic family, He was accustomed to attending mass every Sunday and was not spared from the rod whenever he or his older brother Meinhard did something bad or disobeyed their parents. Gustav has a very fond preference for his older brother, who was described as "strong and blatant" (Gustav was the local police chief), which was the brainchild of the unfounded suspicion that Arnold Schwarzenegger was not his biological son. However, He was very close with his mother and even maintained contact until her death in 1998. In 1965, He has also served in the Austrian Army, fulfilling the mandatory one year of service required from all 18-year-old Austrian males. He went AWOL in basic training so he could join (and eventually win) the Junior Mr. Europe contest. He spent a week in military prison after. He won the amateur Mr. Universe title in 1967, the professional title the year thereafter. He won his first Mr. Olympia title in 1970 at the age of 23, making him the youngest person to hold the title up to the present day.

Picking up his first barbell in 1960, Arnold Schwarzenegger was playing various sports with the heavy influence of his father. Choosing bodybuilding over soccer as a career at the age of 14, he officially began his weight training at the age of 15. Winning the very much coveted Mr. Universe title at a tender age of 20 years, he has also won the Mr. Olympia title for an astonishing seven times! Remaining a prominent name in the world of bodybuilding, he has also authored numerous books and articles on the sport, and has even sparked controversy in his political career as governor of the 38th State of California when, shortly after his election, he was appointed as executive director of two magazines in publication, Muscle & Fitness, and Flex. The two magazines, agreeing to donate $250,000 per annum to the governor's various physical fitness initiatives, and included a contract that gave him at least $1 Million a year, has been criticized by many as a major conflict of interest, since the same office is responsible for decisions on the regulation of dietary supplements.

When he began his weight training at the age of 15, Arnold has, and still is, considered one of the most important figures in the history of bodybuilding, and his legacy is commemorated in what is called the Arnold Classic annual bodybuilding competition. He has then progressed, with the help and guidance of his good friend Joe Weider and his team of dedicated body builders to create the Arnold Schwarzenegger Workout Routines which consisted of a very strict regimen of workouts targeting various parts of his body, some of which includes:

In addition to this very rigorous program designed to build muscles, here are also some helpful eating tips:

Eat 5 - 6 smaller meals a day
Eat foods rich in carbohydrates for 30 minutes after workout
Rest for at least 3 days in a week, and make sure to sleep for more than 8 hours in a day
Do not eat more than 3 eggs in a day, and if possible, substitute beef and pork with chicken and fish
It is recommended to eat 30 - 50 grams of protein with each meal every 3 hours or take supplements like protein shakes to get the required amount of proteins
It is advisable to take between 60 - 100 grams of carbohydrates per day.
People who are bodybuilders do not need to avoid unsaturated fats because they are helpful in increasing hormone levels. However, they are advised to avoid sugar, as they contain empty calories.
As a general rule, it is recommended for people who want to begin their body building regimen that they should be seen by their Doctor first. This is to avoid any unpleasant side effects like an injury.

In relation to his bodybuilding routine, He has a few pieces of advice for people having a hard time gaining weight: he recommends eating at least 5-6 smaller meals a day, sleep for 8 hours or more a day, eating carbohydrates for half an hour after exercising, rest for at least 3 days a week, using protein shakes and supplements to meet the required daily amount of protein, eating no more than 3 eggs a day, and yes, substituting pork and beef for chicken and fish! Arnold Schwarzenegger has admitted to the use of performance-enhancing drugs known as anabolic steroids while they were still legal, writing from 1977 that they were helpful in the maintenance of muscle size in preparation for a contest while being on a strict diet. Because of this, he has been the target of some controversy, when Dr. Willi Heepe, a German doctor who, after publicly predicting his early death due to his use of steroids and his later heart problems in 1999, was sued by him for libel. He collected a whopping US$10,000 libel win against the doctor in a German court for making such claims without having examined Arnold Schwarzenegger personally. He, also in 1999, also sued and settled with a US tabloid, The Globe, who has made similar predictions about his health.

To date, a line of dietary supplements called the Arnold Schwarzenegger Supplements series, by the American pharmaceutical company MusclePharm, is one of the most widely trusted by athletes and bodybuilders alike.