A man had a seizure at a comic convention. The ‘Incredible Hulk’ was there to save him. 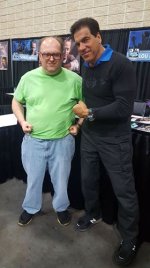 Today I had the opportunity to take Ted to the FanBoy Expo in Knoxville where he was able to meet several of the voices of numerous characters from the animated world that he grew up watching. He also had the opportunity to meet Lou Ferrigno. After this photo was taken Ted stood and was talking to Lou and I was outside the rail waiting. Mr. Ferrigno touched me on the shoulder and said that Ted was trying to tell him something that he couldn't understand. I turned and knew immediately that Ted was having a seizure and I told Mr. Ferrigno what the problem was and I needed to get to him. He cleared his booth and I gently sat Ted on the floor. Mr. Ferrigno called for the medics which responded immediately but the whole time The Incredible Hulk made sure that I had everything that I needed. When Ted started to come around and started to get up the Big Man reached down his hand and assisted me as Ted stood.. I took Ted to the restroom along with an EMT. Mr. Ferrigno came and insisted that I bring Ted back after he recovered for another picture. Talk about a real life Action Hero! This man is the real deal. It was an absolute honor to shake his hand and a greater honor to say Thank You to a gentle Giant. I pray that God will bless this man and keep him safe and out of harms way. Thanks for a wonderful memory.
Click to expand...


Actor and bodybuilder Lou Ferrigno, best known for his role as “The Incredible Hulk,” played real-life superhero at the Fanboy Expo’s Knoxville Comic Con in Tennessee on Friday, when he came to the aid of a man who was having a seizure.


“You could tell he was a little shy,” Ferrigno told the Knoxville News Sentinel. “I thought he was trying to tell me something, and then I realized there’s something wrong with the picture. And then he started to collapse and fall backwards. I ran to grab him to make sure he wouldn’t injure himself.”


McAlister’s father said in a Facebook post that Ferrigno touched him on the shoulder to let him know what was going on. Frank McAlister said he knew right away that his adult son was having a seizure.


According to the father, Ferrigno jumped into action, clearing his booth and calling for medics. After Ted McAlister recovered, Ferrigno helped him get back on his feet — and insisted he come back when he was feeling better to take another picture together.

“The whole time The Incredible Hulk made sure that I had everything that I needed,” Frank McAlister wrote on Facebook. “Talk about a real life Action Hero! This man is the real deal. It was an absolute honor to shake his hand and a greater honor to say Thank You to a gentle Giant. I pray that God will bless this man and keep him safe and out of harms way. Thanks for a wonderful memory.”


Ferrigno told the News Sentinel that he is a reserve deputy for the sheriff’s departments in both Los Angeles and San Luis Obispo county, and that his training as a first responder came in handy.


“Thank God it was okay,” he told the newspaper. “Sometimes, a situation like what happened, the best thing you can do is be calm and know what the problem is.”


“I’m just happy I could be of help!” he tweeted with a story about the incident.


Ferrigno is a retired professional bodybuilder who won the Mr. Universe title in 1973 and then achieved international notoriety through “Pumping Iron,” the 1977 documentary film about his failed quest to dethrone the reigning Mr. Olympia, Arnold Schwarzenegger.

Ferrigno was propelled to fame a year later, after being cast as the title character in the television series “The Incredible Hulk.” He later reprised the role in three “Hulk” television movies.


It’s an image that Ferrigno may never be able to shake — though not for lack of trying.

“I’m not just The Incredible Hulk or Mr. Universe,” his Twitter bio states. “I’m also a husband, a father, and a pug lover.”


Recently, Ferrigno made a brief appearance — as himself — in the 2009 comedy “I Love You, Man,” starring Paul Rudd and Jason Segel. In a particularly memorable scene, Segel’s character confronts Ferrigno at an outdoor cafe, accusing the “Hulk” of trying to list his home with another real estate broker.


“Look, please get your hand out of my face and stop calling me ‘Hulk,’ ” a miffed Ferrigno says in the movie. “I’m a person, okay?”


Segel mocks him and then throws a feeble punch. It’s an understatement to say that Ferrigno easily overpowers him.