Lee Andrew Priest McCutcheon, known as the “Blond Myth” was born on July 6, 1972 in Newcastle, Australia. He is a former International Federation of Body Builders (IFBB) member, or as it is known today, International Federation of Bodybuilders and Fitness, and a National Amateurs Bodybuilders Association (NABBA) professional athlete.
Lee Priest and his sister, two years his senior, were raised in Walls End, New South Wales, Australia, by a mother that was not only a bodybuilding competitor herself, but was very often seen posing with her son onstage. It was in Walls End that Priest attended Plattsburg Primary school. 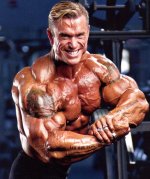 It was Lee Priest’s grandfather that encouraged the young twelve-year-old to enter bodybuilding competitions. With that encouragement and support, Lee entered his first competition just a year later and won! That was to be one of the many competitions young Priest would win. It wasn’t long before Priest won three more competitions – the World’s Championship at the age of 17, where he placed fourth, another win at the age of 18, and secured another win at the still young age of 19! It was through this competition spirit that Priest ended up winning the International Federation of Body Builders competition, Mr. Australia. Due to his young age, Priest faced many challenges competing and securing a win. Although he won The Mr. Australia title at the age of 19, Priest was not allowed to acquire his Pro card. As talented as he was, his young age was working against him.

In addition to his young age, add the fact that Priest is considered one of the shortest amateur bodybuilders in the profession, standing at just 5 feet, 4 inches tall. It’s already two strikes against him – or at least you would think. His competitive weight runs from 220 to
225, but he’s been known to be as heavy as 285 pounds when not involved in a bodybuilding competition.

The disappointment of not being provided with a Pro card due to his young age led Priest to enter the Niagara Falls Championships, an amateur competition, where he was finally discovered. At the young age of 20 Priest received a Pro card. He was now officially a member of the IFBB, the youngest member ever to hold that spot.

Priest successfully competed and won several competitions during the 16 years he was with the IFBB. However, even with all those wins under his belt. Priest had his eye set on a much larger championship win – The Ironman Pro Invitational.
He studied the training doctrines of bodybuilding idols and coaches such as Arnold Schwarzenegger, and hired a training partner that carried the same enthusiasm and discipline as Priest did for bodybuilding – Richard Sicola-Stone.
His aspiration of winning the Ironman Pro Invitational seemed to always be just around the corner, but ultimately, no matter how long and how hard he tried, he kept coming in 2nd and 3rd place, until 2006, when he finally came in first!
After ten years of working hard at the Ironman Pro Invitational, Priest moved to the NABBA and set his goal at competing in the Mr. Universe contest, but the contest was cancelled, and Priest was left without a competition. The NABBA advanced Priest an opportunity to compete in an amateur competition, but he declined. He was then given the opportunity to compete in the World Beauty Fitness and Fashion (WBFF) by Paul Dillet, a retired IFBB professional and current owner and CEO of WBFF, but again, he declined. Priest felt there was a lack of competition.

Priest owns Assassin Nutrition, a nutritional supplement company located in Australia, but sells his supplements mostly online to his multitude of fans.

Aside from his awe-inspiring bodybuilding career, Priest has also won championships as a race car driver. His racing career began in 2002, and as with most amateur race car drivers, he began by road racing in circle tracks. Although still an amateur at car racing, between 2002 and 2004 he still succeeded to win numerous races and titles. After attaining more experience in the field, he evolved to drag racing two years later. As with everything else he ever put his mind to accomplish, Priest became a professional in car racing as well. In 2005 Priest won Rookie of the Year, and in 2006 he won the Southern California Drag Racing Association (SCEDA) Racing Championship in Lancaster, California.

A well accomplished professional, Priest is now additionally involved in the TV and movie arena. His talent was requested by the Hulk movie producers and asked to be involved in the bodywork for not only the movie, but the Hulk video game as well.

Priest continues to be well received by the public and is known by many as a very down-to-earth gentleman. He is frequently approached by TV producers requesting his involvement in the entertainment field. He recently appeared in Rescue Special Ops, a local Australian TV series. Likewise, Priest has been asked to participate in an upcoming Australian movie.

In 2012 Priest was featured in the promotional ads for the Australian version of Big Brother Australia 2012, a reality show about several housemates sharing a Big Brother House.

Just this year (2013), Priest competed and won the NABBA Mr. Universe championship. Amazingly, he accomplished this after being away from competition for at least seven years.

On July 1st, 2000, Priest married a beautiful and amazing female bodybuilder, Cathy Priest, his true love and partner for life.

Many devout fans and professional athletes remark that Priest is “one of the best bodybuilders of today's time who doesn't believe in giving up! Lee Priest's bodybuilding is an inspiration for many young and aspiring bodybuilders.”

augurable most genetically bodybuilder ever