The sport of bodybuilding took a different turn when Dorian Yates succeeded Lee Haney as Mr. Olympia.The sheer mass that 'The Shadow' brought to the contest stage was something new to the Iron Game and Yates's thickness was more akin to an offseason guest posing spot, but with the tightens and graininess included. If Yates was considered a dawn of a new era, then Ronnie Coleman gave that term new meaning. 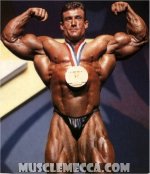 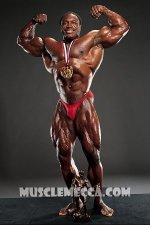 What was really shocking with Ronnie Coleman was how he went from an afterthought to a champion in such a short period of time. When he won his first Sandow in 1998, it was only his second win as a professional since earning his IFBB pro card in 1991. Yes, Coleman did place in the top six at the 1996 Olympia, but fell back three spots to ninth place a year later when Yates won his sixth and final O. But the following year, "Big Ron" stood in the winner's circle and wouldn't vacate it for seven more years. 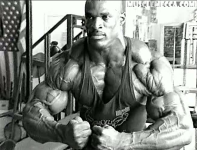 At his biggest, Coleman won a Sandow tipping the scales at an amazing 298 pounds and ,yes, he was in shape. He was able to maintain impressive size with matching conditioning and although 'The King' did not have a narrow waist, that body style was already accepted industry-wide as the norm.

Although he was unseated by Jay Cutler in 2006 (another blocky body style competitor), Coleman will go down in history as one of the greatest of all time. He tied Haney's mark of eight Olympia wins (both consecutive, by the way) and has remained one of the most charismatic and popular bodybuilders on the scene with guest posing routines and his own supplement line. Besides, Coleman is still in great shape and has been able to endure multiple surgeries from chronic injuries suffered during his competitive days and still hit the gym. 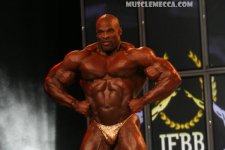 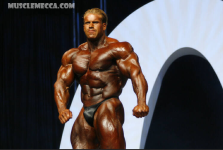 Jay needs to come back and snag the title!
Similar threads